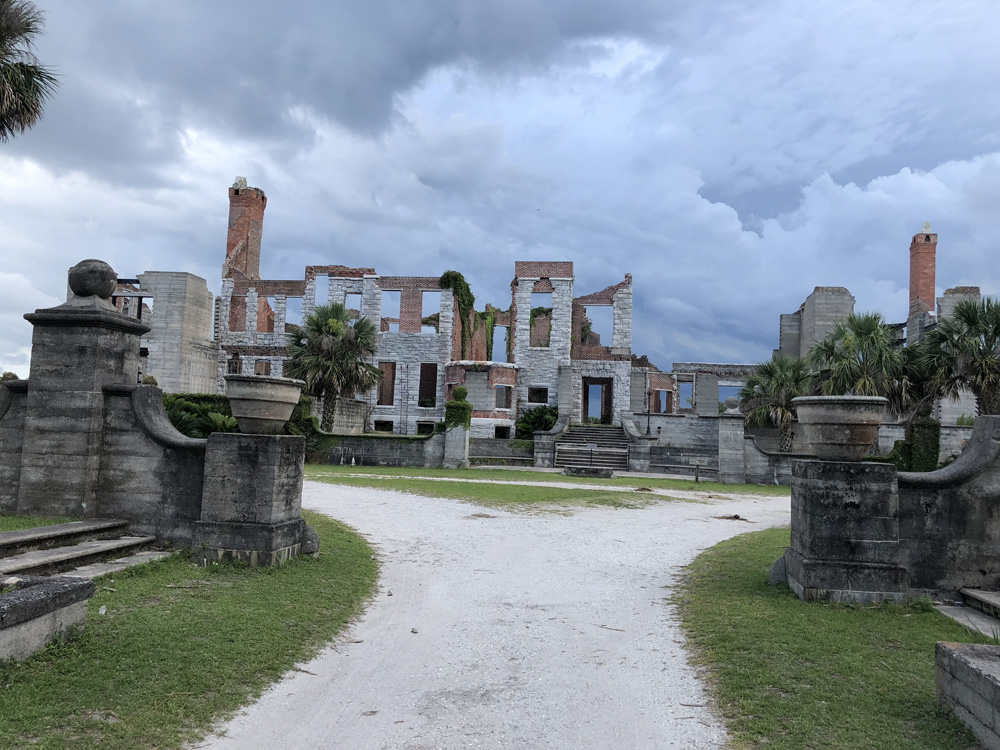 After a couple of very pleasant days and nights moored off Fernandina Beach, it was time to head north to our next destination, St. Mary’s, Georgia. A simple ten-mile journey, we’d been able to see the St. Mary’s waterfront using binoculars since arriving in Fernandina Beach.

We dropped away from our mooring ball and headed north up the ICW. Four miles later, we were crossing out of Florida and into Georgia – our first state line crossing! At the north end of Amelia Island, we turned left at the St. Mary’s River and headed six miles west towards the small community of St. Mary’s. Our cherished Cumberland Island was clearly visible off to starboard. We’d be anchoring off that magical island the next day.

It’s a winding trip into St. Mary’s, reminding us of the times we made this same trip aboard the Cumberland Island Ferry. Now, we’re driving the boat! The shoreline into St. Mary’s is dotted with some beautiful homes, with remaining evidence of the serious damage incurred by hurricane Irma.

St. Mary’s is a quiet, quaint community, influenced by fishing, tourism and the ferry boats providing access to Cumberland Island. We’d dreamt for several years of anchoring off this charming town and after making a few exploratory passes through the anchorage located just off the town center, we found a small empty spot and nuzzled in between the boats and lobster pots. Soon after the anchor was set, we noticed our stern was swinging precariously close to a couple of lobster pots. More troubling was the fact that the other boats in the anchorage, most looking to have been severely damaged by Irma and then abandoned, weren’t even swinging on their anchors. The hull undergrowth that had accumulated since their abandonment was keeping these boats from any movement! For those familiar with how a crowded anchorage works, you know it’s imperative that, as the wind and currents change, all boats swing and point in the same direction, just like the Rockettes swinging their legs. Otherwise, it’s pure pandemonium. This anchorage wasn’t going to work for us! We called into the owner of a private dock and arranged to spend the night tied up in a slip.

We walked the town, had a marvelous dinner and a peaceful night’s sleep. The next morning, we found the only restaurant in town serving breakfast, and made the most of it.

After straightening the boat and filling the fresh water tanks, we threw off the dock lines, headed out of St. Mary’s and pointed our bow towards Cumberland Island. We really enjoy this little town and wish them well in their ongoing recovery from Irma. If you’re ever in the area, stop by and pay the town a visit. You won’t regret it.

We carefully made our way down (or were we going up?) the St. Mary’s River, reversing our course from yesterday, much aware of the strong tidal currents present in this area. Most people are accustomed to tidal ranges of a couple of feet. Around here tides of nine feet, sometimes approaching ten, are the norm! An hour later we were once again in view of Cumberland Island. We snugged the western shore travelling north along the island, heading to the anchorage suggested to us by the National Park Service folks in St. Mary’s. There were only a couple of boats in the anchorage, a typical number that we’ve observed in the past. We circled the area searching for a depth suitable for our preferred 7- to-1 anchor scope and dropped anchor about 100 yards from shore. We decided to stay on the boat for the remainder of the day and night to rest and make certain our anchor was secure. Currents around here are swift, and we didn’t want to leave the boat until we were very certain the anchor was well set. We set the anchor alarm on the iPad, took some compass sightings on some towers and trees, and waited to make certain we were staying put. Our visit ashore to Cumberland Island would have to wait until tomorrow – or so we thought.

The last ferry of the day departs the island with visitors and returns to St. Mary’s at 4:45, leaving the south end of the island pretty much vacant, except for the few that have been given permission to camp overnight. As we watched the 4:45 ferry depart, we got itchy to head over to the island. After all, the anchor was proving to be well set, there was no bad weather forecast for at least the next several hours, and Cumberland Island was only 100 yards away, calling to us, all lonely and in need of our company. So, we put the dinghy in the water, installed the outboard and took off for the island boat dock, about a half mile away.

We spent the next couple of hours walking the beach and visiting the Dungeness Mansion ruins, home of Thomas Carnegie. And except for a very few people, we had the south end of the island to ourselves.

After a quiet and restful night at anchor, and a relaxing morning, the following day we headed back over to the island to complete our visit of Cumberland until the next time we’re in the area.

We’ve been here a couple of times before and just can’t get enough of this special place. If you’re interested, you can read about our previous visit (courtesy of the Cumberland Island Ferry) at the following link.

The Splendor of Cumberland Island

The next morning, we hoisted the dinghy and motor back up onto the davits, pulled up anchor and made our way back out into the ICW, heading north to Brunswick, Georgia. Soon after we were underway, we had to pass the entrance to Kings Bay Submarine Base. What an ominous experience it is to be in such proximity to the U.S. Navy’s east coast home of the Ohio Class submarine fleet.

Here are some photos, much more descriptive than words. Enjoy.

A "Little Free Library" got Jane's attention. Take a book, leave a book.

We arrive at the Cumberland Island anchorage just as the ferry from St. Mary's is departing.

Preparing for the long hike up to Dungeness mansion. This straight, narrow dirt road runs the entire length of the island from Dungeness on the south end to the small, one room church on the north end where JFK Jr. was married.

Entering the grounds of Dungeness.

Wild horses are everywhere and quite unconcerned with humans.

Dungeness, the now burned out vacation home of Thomas Carnegie back in the late 1800's and early 1900's.

The beach on the Atlantic side of Cumberland Island.

Commercial traffic on the ICW, with Kings Bay Submarine Base in the background.

There's a Ohio class submarine in that building.

This not so friendly patrol boat is stationed at the entrance to the base as we pass by, making certain we don't try anything funny.

The lighthouse at the north end of Cumberland Island.

Our anchorage off Cumberland Island. Dejarlo is the center boat.

Not to Be Rude to Floridians, BUT …