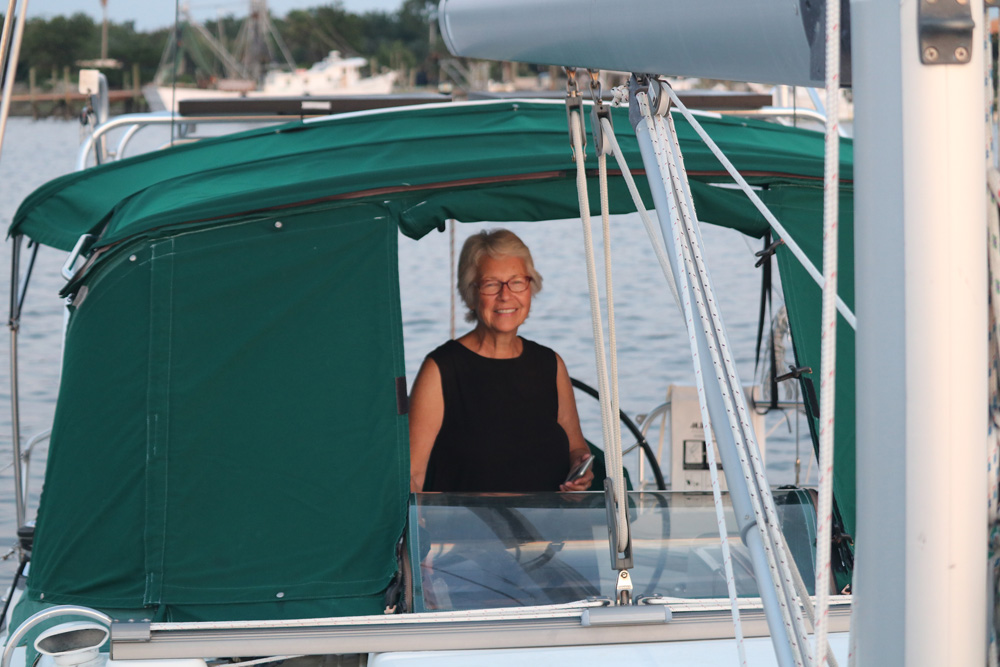 After resolving a couple of electrical issues and waiting for the rains to slow a bit, it was time to say goodbye to Daytona Beach and continue north. We’d spent a week here, met some wonderful new friends (thanks Gordan and Kim on s/v Current Jumper for all your help), had some great meals, attended a minor-league baseball game and a Jimmy Buffett Tribute concert on the beach. We’ll be back one day soon!

After a stop at the fuel dock to fill with diesel, we headed out the marina channel, turned left and re-entered the ICW with our sights on St. Augustine, one of our favorite cities. After a one-night stopover at Palm Coast Marina (and a terrific Mediterranean-style meal at a restaurant named Balboa), we had an easy twenty-five mile passage up to the mooring field off downtown St. Augustine.

The oldest city in the country, this is a must visit place. So, if you’ve never been to St. Augustine, put it on your list.

We’ve been here before several times by car and have often stood on the fort wall looking out at the boats moored off this old city, and dreaming of visiting one day by boat. This was truly a magical moment for us to see our boat out among all the others and knowing we made this dream come true.

Our passage up from Daytona Beach and our three-day St. Augustine visit could not be fairly described with words. We’ll leave it to the pictures below to describe our time here. Enjoy.

Freedom headed through the Bridge of Lions. We'll be headed this same direction in a couple of days.

St. Augustine has a history of pirates, and there they are!

Jane enjoying the peaceful mooring, with St. Augustine in the background. Note some damage to the building behind Jane due to past hurricanes.

Castillo de San Marcos, over 315 years old and the oldest masonry fort in the continental U.S. It was built to protect and defend Spain's claims in the New World.

The storms are rolling in!

The calm after the storm.

One of two mooring fields in St. Augustine.

Our departure from St. Augustine. Saying goodbye, for now, to a wonderful city.

Our next destination was Fernandina Beach on Amelia Island, an easy two-day passage up the ICW from St. Augustine. We planned for an overnight anchorage north of Jacksonville, just north of the Sister’s Creek Bridge. We arrived early in the afternoon, set our anchor, and for several hours were the only boat in the anchorage. At about midnight we noticed another sailboat had come in and was anchored about a hundred yards from us.

This turned out to be a horrible anchorage, as the winds and tidal currents conflicted causing the two boats in the anchorage to drift randomly around their chains. We were both up most of the night making certain we didn’t collide with the other boat. We departed Sister’s Creek Bridge right after the crack of dawn.

A couple of miles north we experienced a first for us. We went aground!

We were lazily motoring along, dead-center in the middle of the marked channel, when suddenly we came to an immediate stop. There was no question as to the reason. We had inadvertently discovered an unmarked shoaling area during low tide. All attempts at backing off were fruitless. There was another sailboat following us about a half mile back. We tried to radio him with a warning but he didn’t have his radio on. When he got close enough to see us waving our arms at him, he frantically tried to maneuver around us … just as he went aground also!

So, there we were, all dressed up in sailboat and nowhere to go.

He rowed over in his dinghy and suggested calling TowBoatUS to come haul the both of us off. I looked at the tide tables and determined we were on a rising tide and thought it best to wait it out for a while. After all, by the time TowBoatUS got to us, we would probably be at high tide and off the bottom. Sure enough, an hour later we both suddenly drifted off the shoal and continued on our way north.

So, you can now put a check mark next to “go aground” on the list of things to do for John and Jane.

The rest of the trip into Fernandina Beach was uneventful. This is another fun little city that needs another visit from us. We spent two nights moored about a quarter mile off the town center with several other boats and, after a short dinghy ride ashore, had a great time visiting the numerous small shops, bookstores and restaurants in town.

We had some stimulating conversations with fellow cruisers moored next to us that we gathered with ashore. One, a nice couple getting ready for some extended cruising outside the U.S., and the other a single-hander just returning from several months cruising the Abacos Islands, Eleuthera and Exuma Islands. We were once again impressed by the gracious support from cruisers with tons of experience. They seemed to be as interested in our very limited cruising story as we were in their extensive cruising pedigrees. We hope that one day, once we’ve gained some experience, we can do the same for those new to cruising.

As before, the pictures below can do a better job than words of describing this part of our journey.

You see some interesting people in the anchorage (off Fernandina Beach, FL)

Huge piles of sawdust used in the production of paper.

When things get too hot, simply hop in the water!

The dinghy ride back out to Dejarlo after a great dinner ashore.

Some of the beautiful homes lining the ICW. At times the ICW runs very close to homes and docks.

Horrible results from past hurricanes are found everywhere.

DON'T LET JOHN USE THE CAMERA!!!

Always on the lookout for lobster pots. They're everywhere!!!

Dodging lobster pots as we prepare to request an opening of this "bascule" bridge by the bridge attendant.

Then we dodge the weekend crowd and their go-fast power boats and jet skis.

The ship's cook performing culinary miracles in the galley.

The iconic Jacksonville cooling towers. These were imploded and demolished a few days after we passed by.