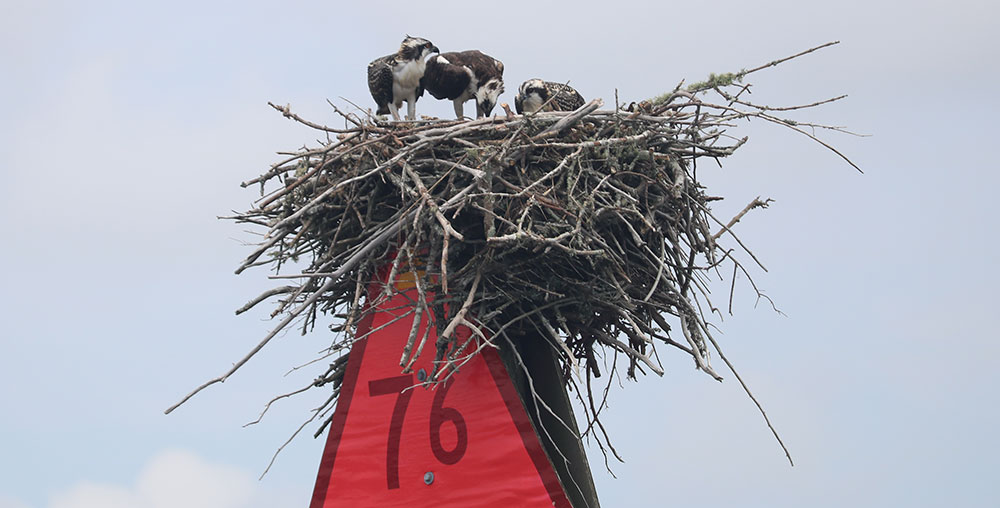 Our return to Southport, NC and Dejarlo after a thirteen-day absence was filled with anticipation. We missed being on the boat and were anxious to see how Dejarlo handled all the inclement weather Southport had experienced while we were gone. As we pulled into the marina parking lot, not a word was spoken. As we made our way down the long walkway towards our boat slip, we were silent. It was only when we saw that Dejarlo was just as we had left her, undamaged from the extreme weather, that we began to smile and breathe easily.

Our stay in Southport, though interrupted by some difficult family responsibilities back home, was very pleasant. We decided to spend a couple of additional days to re-group, do some laundry and take in some of the local sights and restaurants. Southport is a “must see” destination and on our list of places to revisit next year on our way south.

Our morning of departure was a beautiful day, filled with anticipation of travel up the infamous Cape Fear River. Over our many days here, we had allowed ourselves to succumb to the power of this name – Cape FEAR! We’d spent many evenings looking out onto this body of water, fearful that it might just live up to its name. However, our experience on the Cape Fear River was quite placid, nothing more exciting than on a large bumpy lake, although I’m certain that high winds and inclement weather could prove a challenge.

Our trip from Southport up to Beaufort would require a couple of overnight anchorages along the way. Our first night at anchor was Wrightsville Beach, a popular vacation resort destination for many. The large anchorage was immediately behind the ocean beach area and just off the ICW. When we arrived in the early afternoon, the anchorage was already filled with dozens of boats, some transient, some seemingly permanent fixtures. We slowly motored around the area until we found a good spot, set the hook and settled in for an evening in the cockpit with wine, good food and YouTube videos. The following morning, after coffee and oatmeal, we pulled up the anchor, made our way out of the anchorage and back into the ICW. 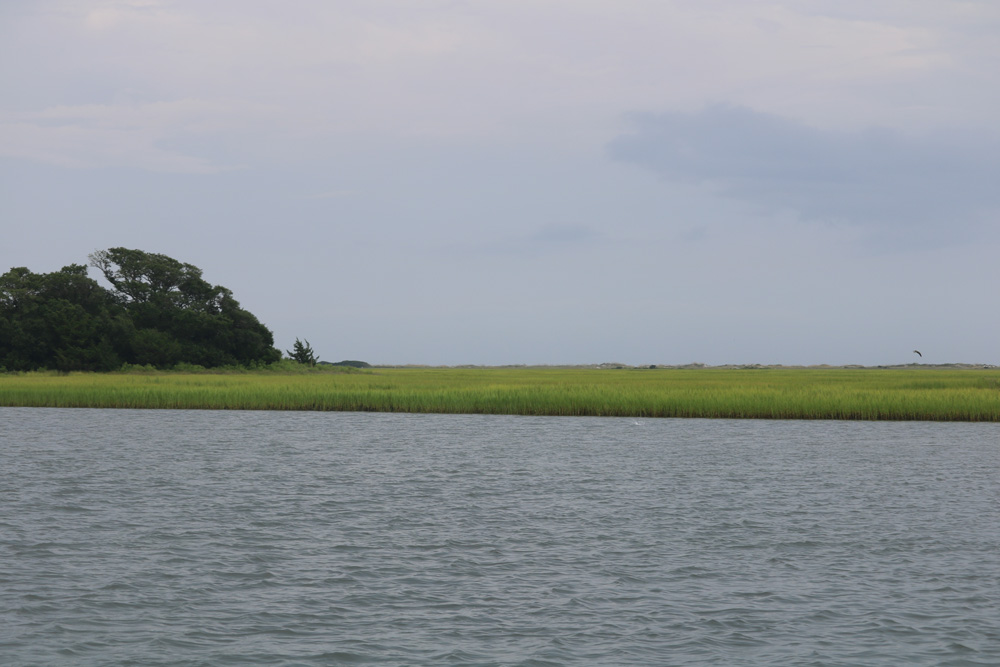 A typical view from the cockpit as we travel up the ICW. Although this photo doesn’t do it justice, the scenery is truly spectacular!

The forty miles up the ICW to our next anchorage at Camp Lejeune was uneventful … mostly. Some parts of the ICW can be a little humdrum. This was one of those days. However, there’s always danger lurking just below the water’s surface, as the ICW can suddenly change from a depth of twelve feet to less than five feet in an instant. Our draft is a little less than five feet. Thus, even though we’ve often got the boat’s steering system set on auto-pilot, we must be on constant lookout that we’re not getting into shallow water. This constant attention to the depth sounder can make for a long, tedious day.

Our attention to the changing water depths paid off later in the day when we entered the Camp Lejeune region of the ICW. There’s an area where a narrow section of the ICW intersects with the New River and New River Inlet leading out to the Atlantic Ocean. It’s an area that’s narrow, with sharp turns and local traffic traveling way too fast. We were on high alert.

While we have a fancy Garmin chart plotter at the helm, we prefer to use our Apple iPad loaded with the Navionics app as our primary means of navigation. It’s been our experience that the routing information we get from the Navionics app is spot-on 99% of the time, which means we’re always on the lookout for that one percent. This particular intersection, near red marker 72A at Camp Lejeune, had all the ingredients for that “one percent” flaw. The first red flag went up when we experienced some confusion regarding the chart and which of the markers were ICW markers, and which were intended for the entrance into Camp Lejeune. Evidently, the Navionics app was confused as well, as its routing algorithm guided us between two red markers. For those that understand the rules of the road out here, that’s a no-no!

With extreme caution, we slowed way, way down to a speed of about one knot and proceeded very cautiously. Sure enough, we softly hit bottom and came to a stop. We were aground! No problems, we’ve done this before. Neutral, then slow reverse, increasing towards full reverse … and we were safely off the bottom and backing away.

Now what do we do? All the water on either side of this sand bar is indicating too shallow for our draft. But wait a minute, here come some local power boats speeding through the “shallow area”. They must know something we don’t (local knowledge always does). We cleared away from the route we were instructed to take through this intersection by Navionics, and carefully proceeded through the “shallow” area we were instructed to avoid … and we were on our way. A little shaken, but once again on our way to our next anchorage for the night. 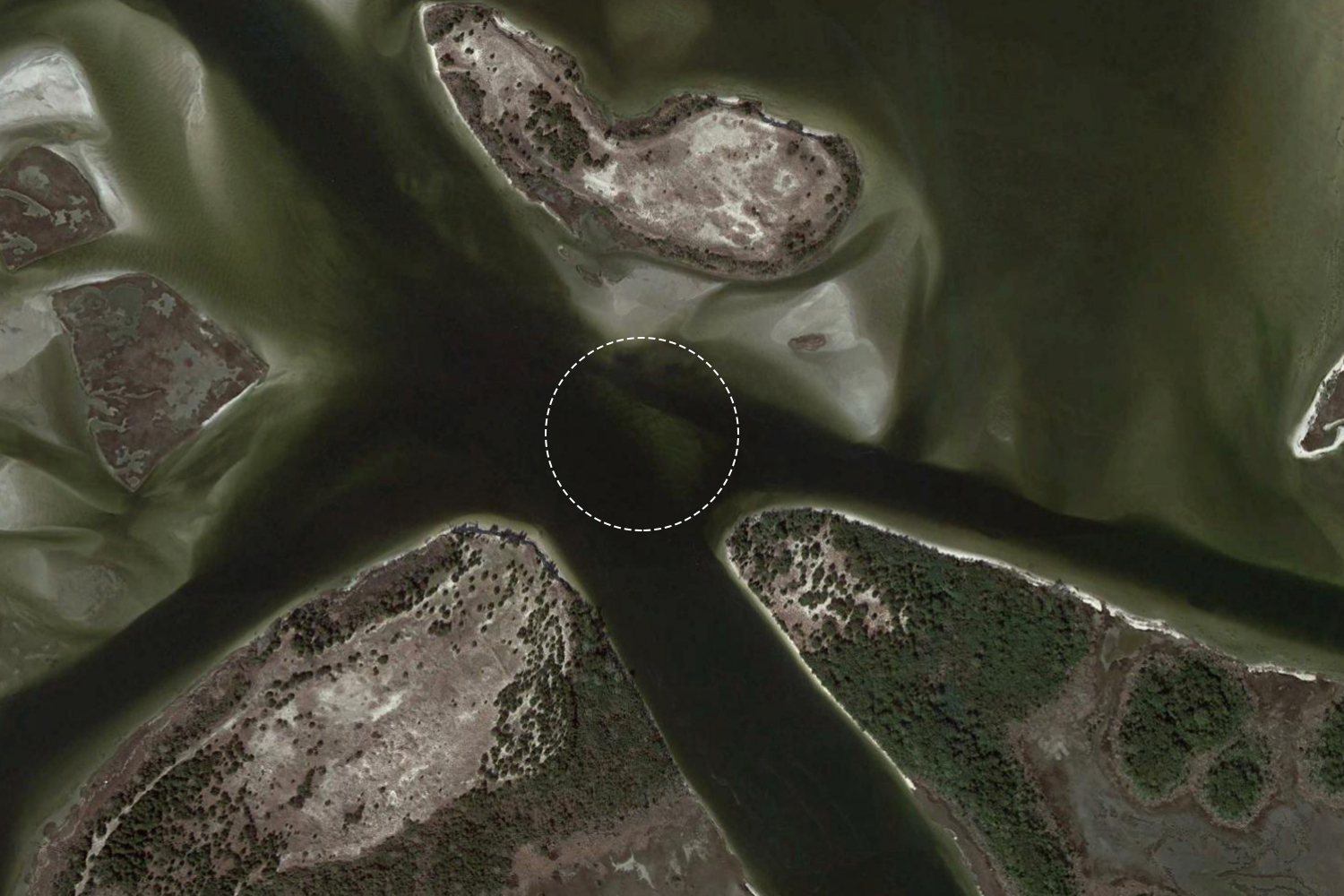 The intersection of the ICW and New River at Camp Lejeune. This Google Earth image clearly shows the sand bar that caused all the ruckus. The route of the ICW is from left to right in this image, directly through the sand bar.

By the way, the following day, as we were many miles north of Camp Lejeune on our way to Beaufort, we heard an emergency “Pan-Pan” call to the Coast Guard. A large, fifty-three foot, power yacht was taking on water and seeking assistance as they feared they would have to abandon ship … in the middle of the ICW! When the Coast Guard requested their location, they indicated they were just past marker “72A”. That sounds like a familiar marker number!

Apparently, they were using the same Navionics chart information we use. They took the same route we had originally attempted … over the sand bar. The difference is that we made the attempt at one knot, while they probably went through the area at twenty knots! Our guess is it ripped the props and prop shafts right out of the boat, and the sea water poured in.

The Coast Guard dispatched personnel to the scene but were still a good distance away. Luckily, there was a Tow Boat US vessel in the area who got there in time to temporarily patch the breached hull before the crew had to abandon their luxury yacht (although in that area of the ICW, they probably could have easily waded ashore).

Our night at anchor was only about a mile north of red marker 72A and the New River intersection, a place called Mile Hammock Bay. This is an area owned by Camp Lejeune, but available to cruisers as an anchorage, as long as you don’t go ashore. It’s a really nice, large anchorage, surrounded by tall trees and well protected. There were two or three boats already at anchor when we arrived. We found a nice spot in about ten feet of water, set the anchor and relaxed for the evening.

While Mile Hammock Bay is available as a non-military, recreational anchorage, it’s still part of a military training facility and the fine folks at Camp Lejeune make it very clear that the anchorage could suddenly, without notice, day or night, be overtaken by Marines in amphibious vehicles and helicopters practicing beach landings. I guess we’re just to ignore any armed, mean-looking, camouflaged Marines that may suddenly appear next to the boat!

We love anchoring in secluded areas. Quiet, secluded anchorages have made for some of our most memorable moments while on this trip. Even though we have two small showers in the boat – one in each head (bathroom) – when we find ourselves in anchorages where we have enough privacy, we usually take our showers, after dark, on the back, stern swim platform. It provides for a nice warm shower and keeps moisture out of the boat.

That night, long after sundown, while pitch dark, we made our way out to the back stern for our showers. Suddenly, while we were both naked as blue jays (where did that phrase come from?), up over the tree line, with spot lights aglow, comes a U.S. Marine Corp “Osprey” helicopter screaming at low level through the anchorage! The entire anchorage was suddenly awash with light! Anyone on the other boats in the anchorage that had gone below for the night, came back up on deck to see what all the commotion was about. And there we stood, in all our naked glory! And this particular Osprey helicopter pilot didn’t just do this “strafing” run once. Oh, no! This performance lasted for the next couple of hours! Had we not been in a state of panic, and thought to do so at the time, we would have simply saluted smartly and continued with our stern showers.

This is liv’n the dream! 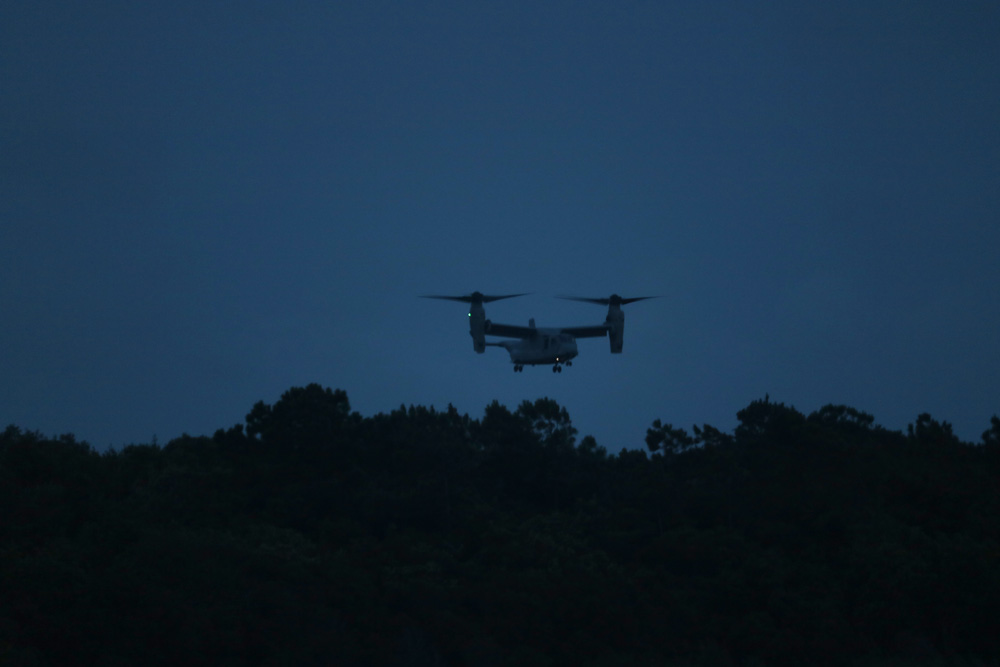 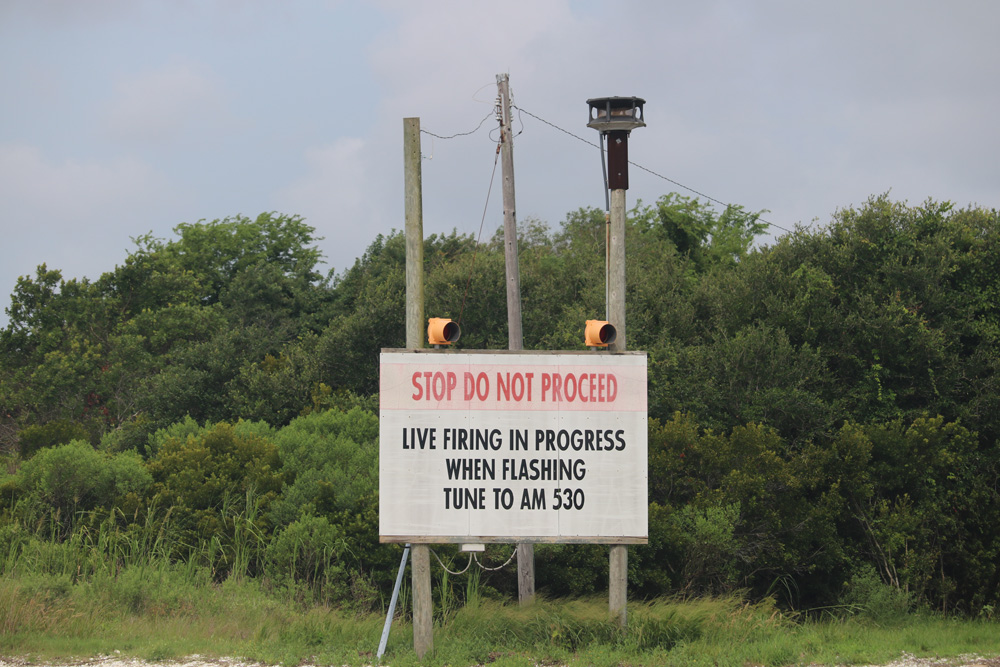 Traveling through the Camp Lejeune area can have its surprises. 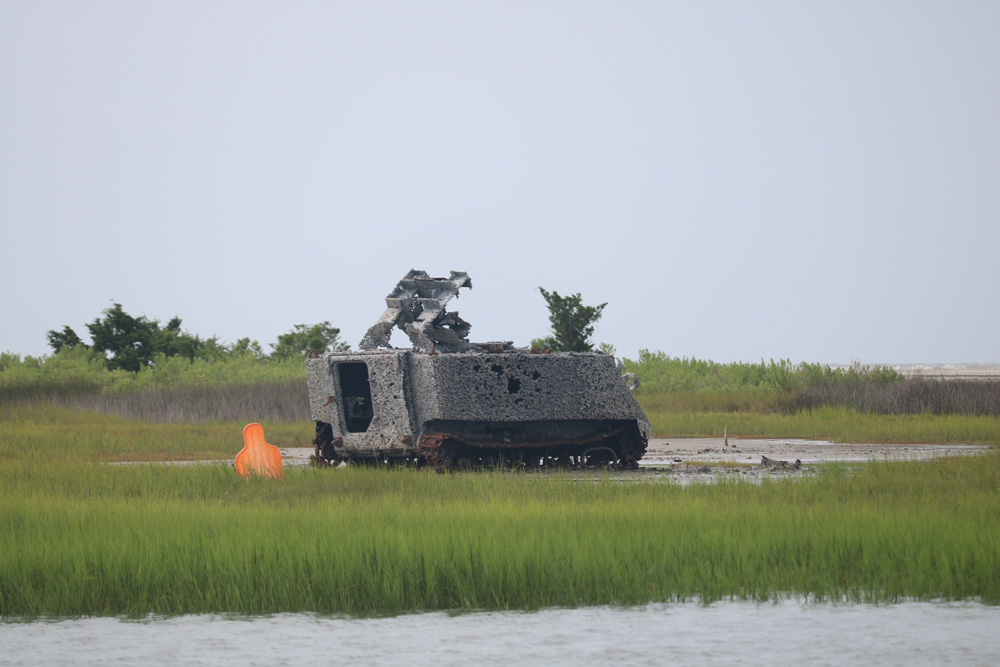 An old tank being used for target practice. I think they killed it!

The following day, we lifted the anchor and headed north, bound for Beaufort, NC. This would be a special destination for us. Six years prior, on a road trip to the east coast, we had stopped in Beaufort and found ourselves at the Dockhouse Restaurant on the waterfront, overlooking all the boats moored in Taylor Creek. We vividly remember discussing how wonderful it would be to one day sail into Beaufort aboard our own boat.

And here we are.

We’ll have lots more to say about our time in wonderful Beaufort in our next post.

Submit your questions for an upcoming video ...

We’ve received many questions from readers about various aspects of our adventure. We’ve decided to address these questions in a future video.

If you have any questions for us, please submit them in the comments section below or on the form of the “Contact Us” page.

They can be of any subject. Do you have questions about the boat? Are you interested in how we spend our time on the boat? Do you have technical questions about batteries, the engine, our navigation equipment? Are you interested in the cruising lifestyle? How about the different expenses of this lifestyle and how the “real” expenses compare to what we thought they would be?

We’ll add your questions to the list we’ve already compiled and answer all we can in a video we hope to release in the next month.

We know there are lots of boaters and non-boaters out there that read this blog and that may have comments or advice for us as we continue on our journey. We welcome and encourage your comments an suggestions below.

50 MPH Storm Wall Spun Us Around Like a Tonka Toy!