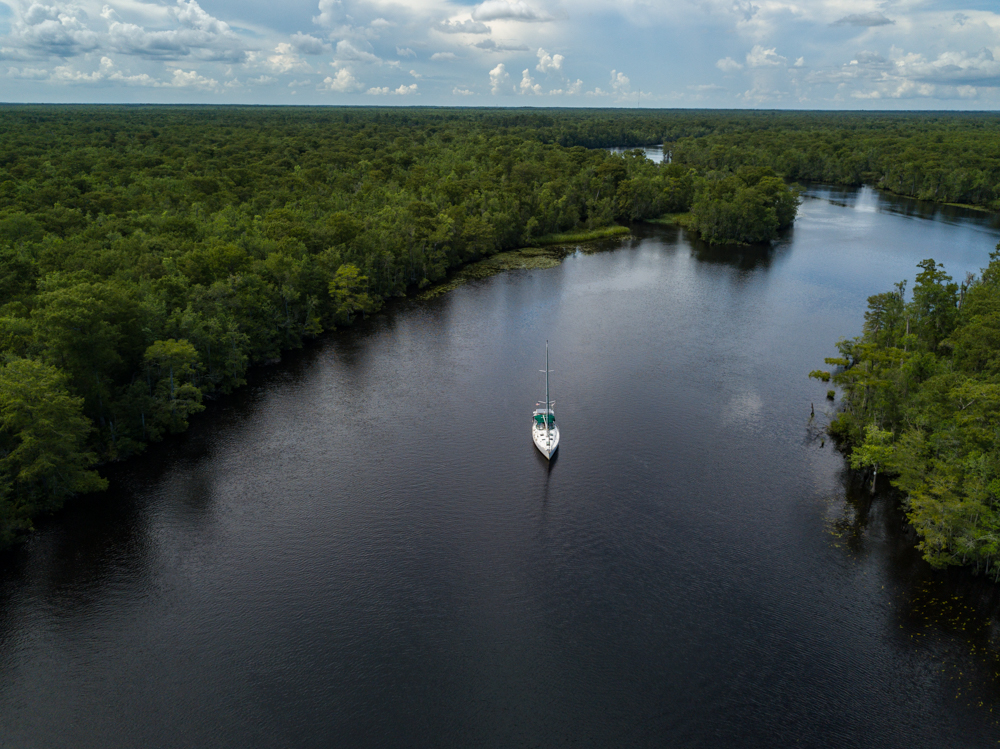 Our time at the Isle of Hope Marina, just outside Savannah, was an unforgettable experience. This is a truly amazing city, filled with stark beauty and epic history. Of the sixteen days tied up at the marina, eight of those days John spent solo as Jane flew to Shreveport to spend time with her elderly mother. Needless to say, when she returned, John was anxious to get moving north again. After a couple more days allowing weary Jane some rest and a few trips into Savannah to tour the city, we said goodbye to newly acquired marina friends and pushed off the dock.

Our next milestone was Beaufort, South Carolina. At our leisurely pace of about thirty to thirty-five miles per day it would take us a couple of days to get there. The ICW (inter-coastal waterway) in this part of the country is winding. Beautiful, but winding, with surprises around every corner. You can go for hours without seeing civilization and then suddenly find yourself among numerous shrimp boats and hoards of annoying jet skis, zipping to and fro.

We prefer to spend our nights at anchor in a secluded cove or creek off the ICW. These quiet, peaceful anchorages are truly some of our most memorable times on this trip. Using our cruising guides, we usually know well in advance where we will be anchoring for the night. However, this part of the ICW, from Savannah to Beaufort, was devoid of anchorages suitable to our taste, so we decided to spend the night at Skull Creek Marina on Hilton Head Island. After Ubering into town for a nice meal, we settled in for a pleasant night’s sleep.

The next afternoon, we arrived in Beaufort, SC. The downtown marina here is one of the best we’ve experienced. We picked up a mooring ball just off town center, put the dinghy in the water and motored ashore. The historic downtown area is a short walk from the marina and filled with interesting shops and quaint restaurants. This is a town we want to visit again!

After returning to the boat, we stored the dinghy back on its davits, had a glass of wine, and retired to bed, anxious to depart the next morning, headed north.

Immediately north of downtown Beaufort is an old swing bridge with a vertical clearance of thirty feet, much too short for a sailboat like ours with a mast height of fifty-five feet. Most modern bridges on the ICW have clearances of 65’, or more. However, there remains many “lift” and “swing” bridges that require an opening by a human bridge tender to allow taller traffic through. Some bridges will open immediately on request, some open on request only on the hour and half-hour. The Beaufort bridge opens on request, on the hour and half-hour. So, per procedure, we departed our mooring shortly before 9:00 am, called the bridge tender and requested an opening. She happily replied in the affirmative and instructed us to wait just off the bridge entrance for the 9:00 am opening. In other words, to “hover” in place about a hundred yards from the bridge. Now, for those familiar with the winds and currents of the ICW, and the difficulties of remaining stationary in such conditions with a single-screw sailboat, you can understand our frustration when the 9:00 hour came … and went.

Finally, at 9:10, she called us on the VHF and informed us that she was having difficulties opening the bridge and that we would need to wait a little longer. When we requested a time estimate, she replied, “about fifteen minutes”. So, we did circles in the ICW for fifteen minutes, and resumed our position off the bridge opening for the 9:30 opening. Well, 9:30 came and went also. We called her on the VHF and were informed that she needed to call in the engineers to fix the bridge. Uh-Oh!!! This doesn’t sound good. We have two options for traveling north from Beaufort: through this bridge, or back tracking sixteen miles south to the Port Royal Sound ocean inlet and going around Beaufort offshore.

To make a rather long story as short as possible, we spent an additional night at the Beaufort Marina waiting for the bridge to get fixed. The next morning, at the appointed 9:00 am hour, while we “hovered” in place just off the bridge opening, the bridge finally opened, and we were once again on our way north. 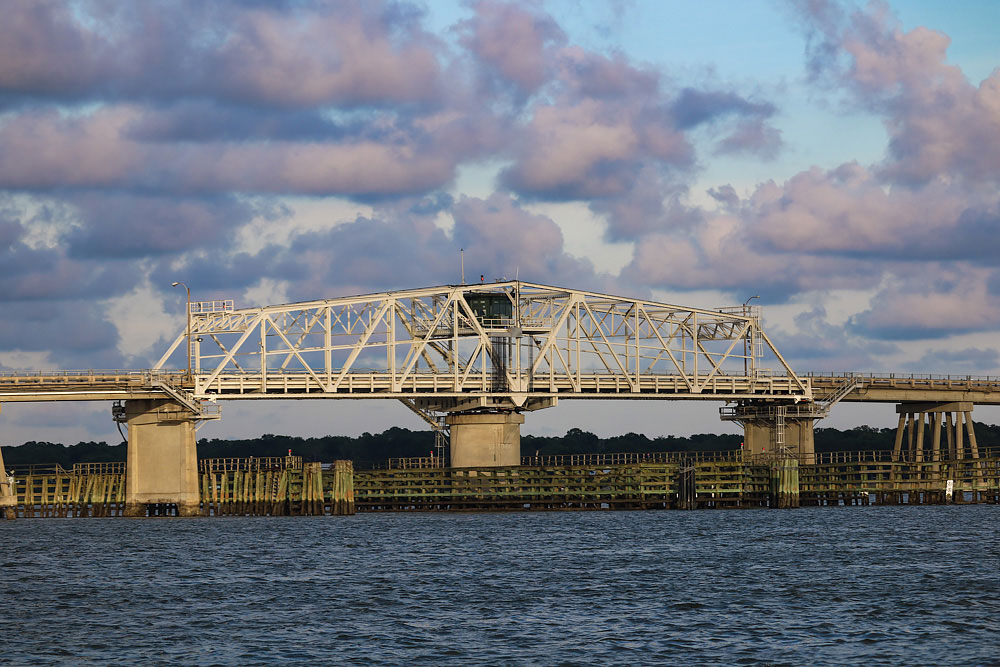 The Bridge that Wouldn’t Open

Our next major objective was somewhere at anchor in the vicinity of Charleston, SC. We had discussed staying in Charleston for a night or two, but as it was the July 4th weekend, there wasn’t marina space anywhere to be found. We elected to bypass Charleston on this trip, motor straight across the South Channel of Charleston Harbor and continue making our way north, spending our nights at anchor along the ICW. We were concerned with commercial and tour boat traffic in Charleston Harbor but, like so many other things on this trip, it turned out not to be as bad as we had feared. It was a real joy to motor just past Fort Sumter on our way across the harbor. We’ll return here next year on our way south to the Bahamas to spend some extended time in beautiful Charleston.

A day of travel, a night at a secluded anchorage, and another day of travel found us at a small marina in Georgetown, SC. It was July 4th and we were ready for some fireworks. Fortunate for us, the fireworks display was taking place just off the marina, so we were able to sit out on our front deck with some wine and celebrate our nation’s birthday. The next morning, we filled the diesel tank and headed north through the Waccamaw National Wildlife Refuge along the Waccamaw River, part of the ICW. This was a highlight for us as this is one of the most beautiful winding rivers we’ve experienced. We found a gorgeous anchorage just off the ICW and, with the exception of a few fishing boats and nuisance jet skis, we were alone for the evening and night. I was able to launch the drone from the deck and take some great aerial shots of the area. 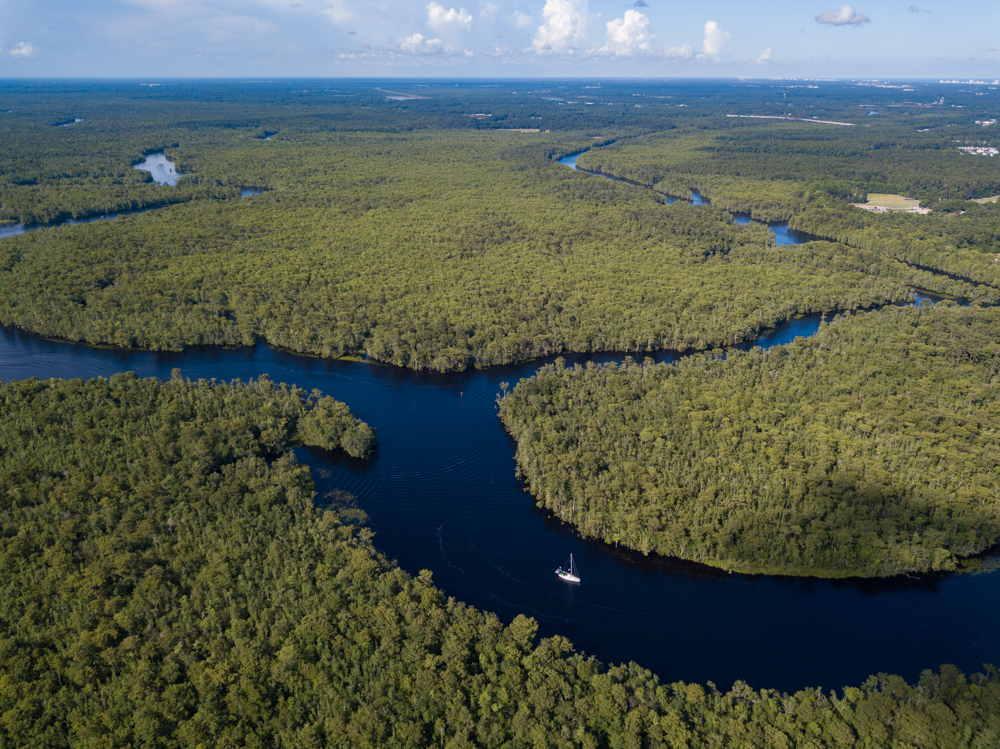 Dejarlo at anchor just off the Waccamaw River and ICW. If you look carefully in the upper right-hand corner, you can see North Myrtle Beach on the horizon [Click for larger image].

Our next destination was Southport, NC. But first, we had to travel through the Myrtle Beach area – on the weekend, when everyone that owns a boat or jet ski wants to be out on the water. And it’s not just THE water, it’s THEIR water, and you’d better get out of their way! And did I mention that the ICW through Myrtle Beach is a narrow passage and challenging navigation, even during the weekday when recreational boating is minimal. Suffice it to say, it was a long, hard day, with a little bit of cussing and some less than friendly gestures, but we got through it and made our way to Southport, NC. 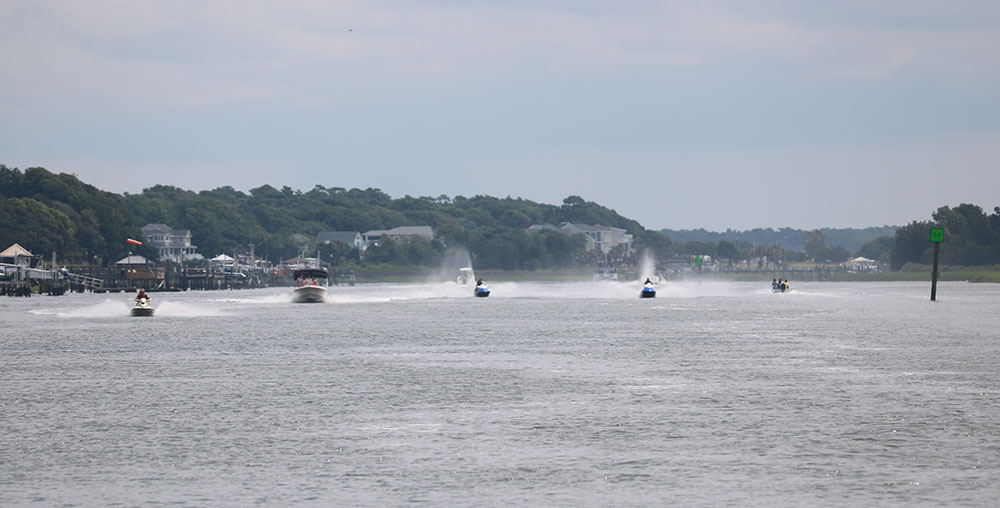 Heading up the ICW off Myrtle Beach.

We’d intended to spend one or two nights at Southport, re-provision our food supply, fill up with water and fuel, and be on our way. On the morning of our departure, with the engine running and mere minutes from pushing off the dock, Jane got the call we’d been fearing for some time. Her mother of ninety-two years had passed away.

Everything stops at that moment. Everything! There’s just no way to describe the moment.

The marina found space for us in an available slip. We made our arrangements to fly home to St. Louis.

It occurs to me, as I complete this latest travel post, that we spend an inordinate amount of time writing about the bumps in the road we’ve experienced on this journey. This may be because the bumps in the road are more “dramatic” and easier to write about. Maybe it’s because it’s difficult for me to articulate the wonderful things we see and experience every day and every hour as we live our lives so close to Nature. Hemingway could do it, so could Mark Twain, Capote, Fitzgerald and Stephen King. But them I’m not. Whatever the case, I can assure you that the difficulties we sometimes experience and write about make up only a small portion of the totality of our experiences on this adventure.

I have been asked frequently, “Is it everything you expected?” The answer is no.

Jane and I studied hard for many years, reading dozens of books, watching hundreds of videos and interviewing scores of cruisers, to understand as much as possible the risks, the highs and lows of this unique lifestyle. I can report that, so far, the real lows we’ve experienced are much less than anticipated, and the real highs are much greater.

Maybe it’s just an indication of my inability to effectively put into words the awe inspiring, “take our breath away” moments we’ve been experiencing. It’s kind of like asking a camera to fully capture the moment you first walked up to the rim of the Grand Canyon. They just don’t make a camera that good.

And with that, here’s the camera doing the talking:

Charleston Harbor from a distance.

Tour boat on the way to Fort Sumter.

Not the way I would want to store my boat!