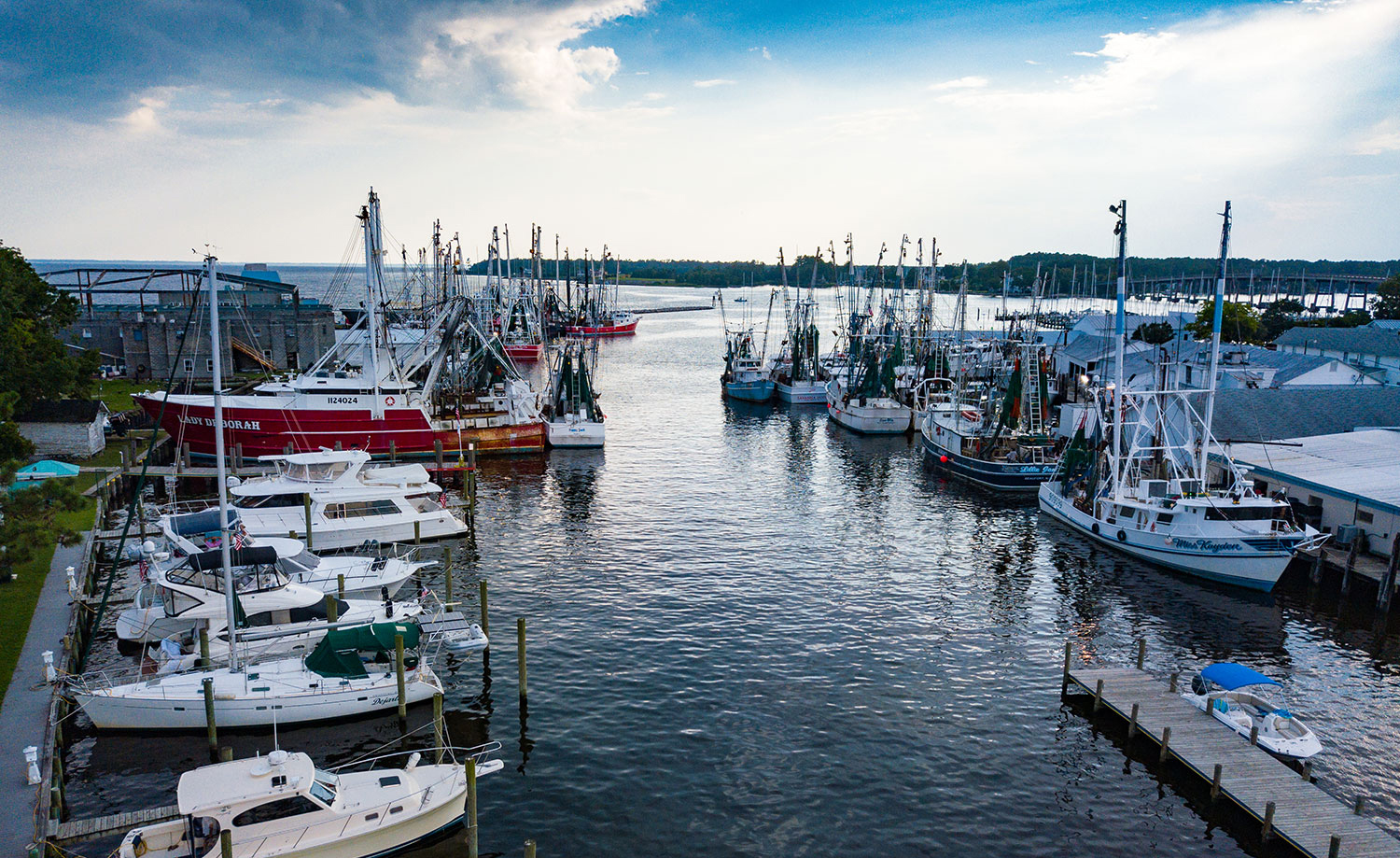 50 MPH Storm Wall Spun Us Around Like a Tonka Toy!

Our planned short stay in Beaufort, NC was extended significantly by the need for alternator maintenance. We’d noticed that the alternator had stopped charging and providing a signal to our tachometer a couple of days out, so we decided that Beaufort would be a good place to get things fixed.

No problem! We love Beaufort! We enjoyed the waterfront restaurants, the Saturday morning farmer’s market, and spending time with new friends. We rented a car and drove up to New Bern, NC for more farmer’s market and good eats. While there, we visited The Pepsi Store, the little pharmacy that was the birthplace of Pepsi-Cola back by 1893. It’s a great story. New Bern was a great visit and well worth the short drive from Beaufort. 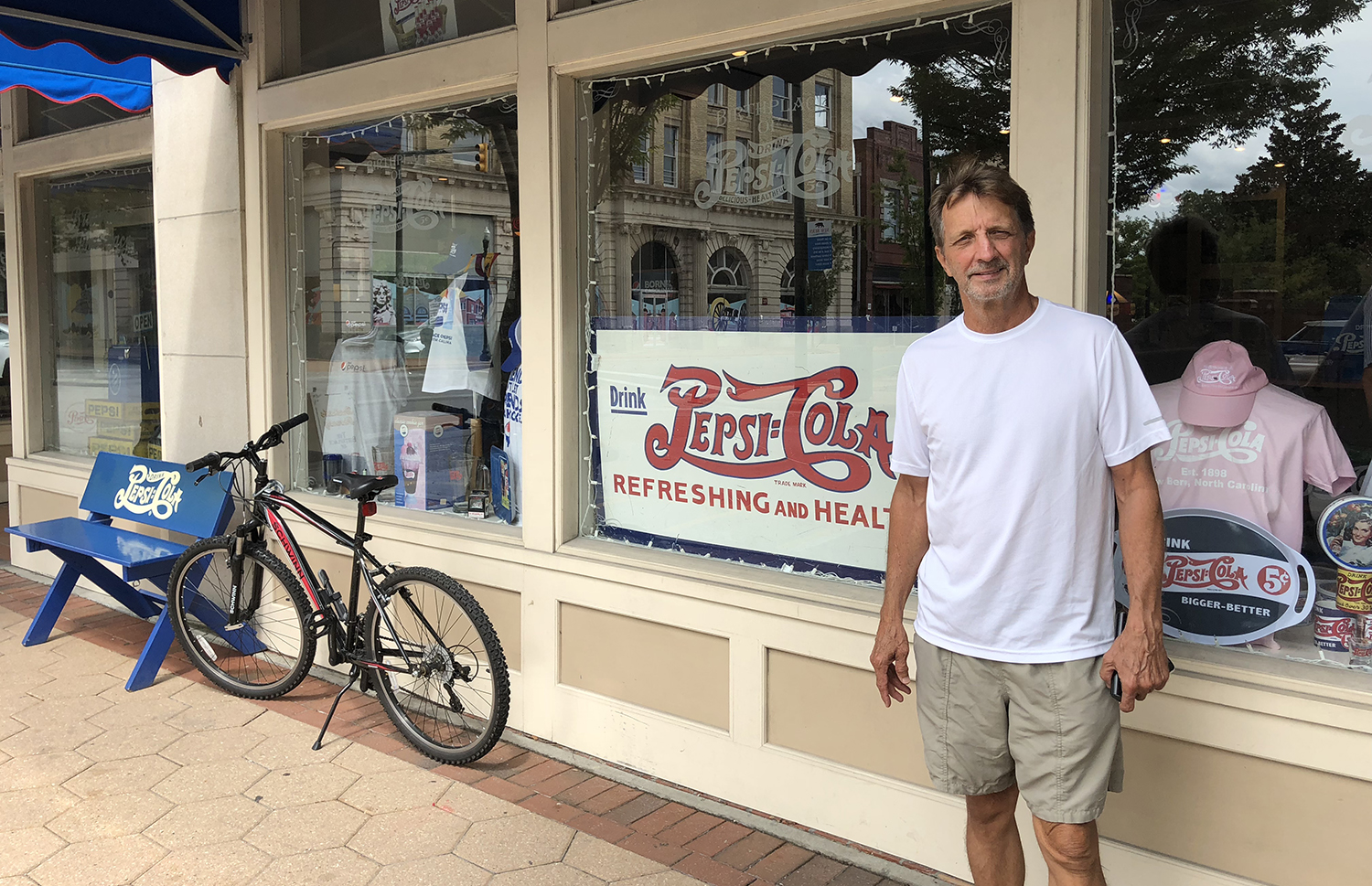 The Pepsi Store … the pharmacy where Pepsi-Cola was born back in 1893. [Click on image to enlarge]

After ten days in Beaufort, we thought it high time to go before we had to declare residency. We’d been here ten days, the alternator was fixed with a new regulator and our food lockers were filled. We topped off our diesel and water and headed north into Adam’s Creek towards Oriental, NC. The area north of Beaufort, just before Adam’s Creek, can be confusing navigation. The inattentive boater can suddenly find himself hard aground and in need of a tow by one of the local tow companies. As we were approaching Adam’s Creek, we were passed by TowBoatUS, with lights flashing, headed towards the scene in the picture below. Note the boat captain standing next to his boat as TowBoatUS maneuvers into position. 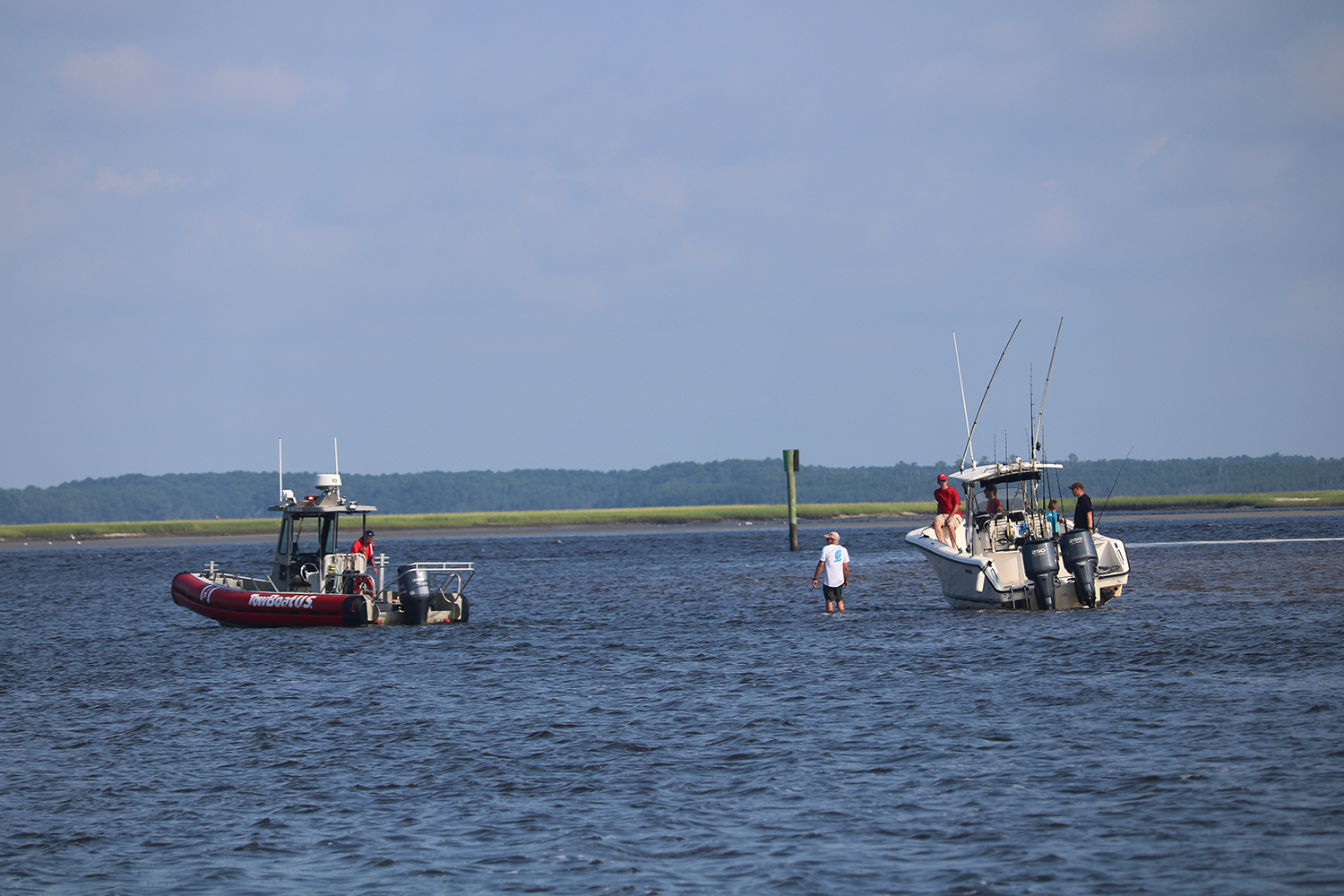 An inattentive boater stands next to his boat while waiting for a tow. [Click on image to enlarge]

Late that afternoon, after a long slog up Adam’s Creek and passage across the Neuse River, we entered Oriental. This place was high on our list for a visit. We took a slip at the Oriental Harbor Marina, directly across from the processing plant where the shrimp boats unload their catch. Ordinarily, we would not prefer this location, but it turned out to be fascinating watching all the activity. Below is a short video of our location tucked far back into the bay. You can see Dejarlo parked in front of the hotel, across from the processing plant. 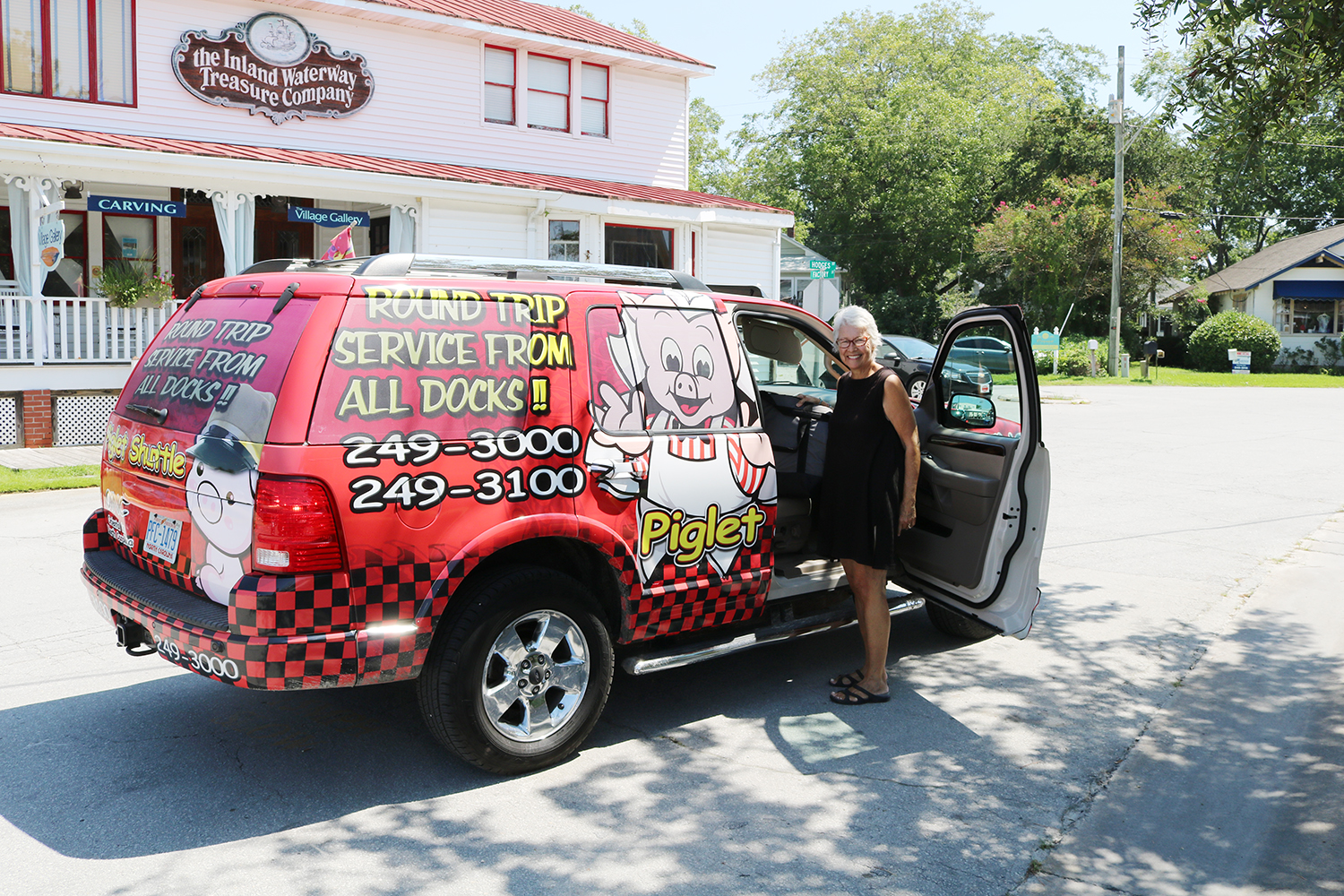 We spent four days enjoying Oriental, much longer than we’d planned but, once again, we’re in no hurry and we’re enjoying seeing the sights and meeting the interesting people. We also took this opportunity to have work done to our dinghy. We’d been dealing with a persistent leak for quite a while. We were informed of a service in town that could fix our problem in a couple of days. We called and, sure enough, they picked up our dinghy that evening and returned it, good as new, two days later, and after eight patches!
Jane’s Oriental Experience ...

Oriental, NC is another of those small, quaint, coastal villages on the ICW that we’ve fallen for. The friendly villagers number about 900, and it seems to us most all are devoted to their lucky spot on these eastern waters. Their town slogan is “Sailing Capital of North Carolina”.  Their devotion: the wide and beautiful waters of their Neuse River; boats of all sizes and denominations; ubiquitous water sports; MONTHLY sailing regattas!; sailing instructions for all age groups; fresh seafood and fish available everywhere in town; annual dragon boat races for all ages; and just down the harbor dock from us, more big, beautiful shrimp boats than we’ve seen in one place … amazing to watch those captains maneuver their behemoths in, out, and around a relatively limited space, although that said, sitting in our cockpit one afternoon, we heard a loud grinding crunch down the harbor. Yes indeed, unbelievably a shrimp boat had scraped against another!

Oriental families have maintained their graceful, old-fashioned homes complete with porches, screen doors, flowers, white picket fences, many from the town’s founding in 1860’s. There are sidewalks through town, but streets have remained narrow and not many at that; some residents even travel around town on golf carts. Oriental received its exotic name from the first postmaster’s wife who felt SURE there could be a more appropriate name than Smith’s Creek for this beauty of a little town. She saw the nameplate of the Sailing Steamer Oriental which had sunk nearby and there it was! Eureka, it is Oriental, and there’s still no other Oriental in the United States. And, surprise, the town mascots are hundreds of … DRAGONS!

We thought we were just staying over one night at the town marina, but lucky for us there’s a dinghy expert here. He took our air-leaking dinghy, NiJak (after grandsons Nick and Jake), and assured us said dinghy would be good as new in three days. And so it is, much to John’s delight, since he was the main pumper-upper before we dinghied anywhere.

A typical cruiser experience (but our first) happened just after we docked on a Sunday at the Oriental Marina and Inn (with a pool AND tiki bar!).  We were tired and hungry but not interested in cooking on board. We stopped across the path at The Bean (Oriental’s Starbuck) and seeing there was no lunch food asked about a restaurant. Oh yes, the counter clerk assured us, there’s one open, it’s just down here a few blocks and then right a few blocks. Well that was OK even though rain threatened; we’d brought along one raincoat and one umbrella, just in case … and so we began walking, walking, walking, walking, and then the east coast downpour began, complete with lightning and thunder. No Uber, no taxi, no bus, no golf cart with a friendly villager … we finally covered the two miles soaked but happy to have two great fish specials. Cruiser lessons learned: when asking a local for information, get the specifics; not much is open on Sundays in small towns; and always have enough rain gear around. ALSO, keep a snack handy …

We departed Oriental and headed north up the Neuse River. At a length of 275 miles it is the largest river entirely contained in North Carolina. There was enough room and enough wind that we could put both the main and genoa up and enjoy some sailing for a couple of hours. Our next destination was Belhaven, NC, another small town high on our list to visit. It would take us two days to get there, with and overnight at anchor in Bonner Bay.

Bonner Bay is a huge anchorage area, just off the ICW. Even though there was plenty of room in the anchorage, we were a bit concerned about the possibility of storms that night and the fetch associated with such a large area. We dropped anchor in ten feet of water, putting out plenty of chain in case the winds picked up. This was a beautiful location, with only one other boat in the anchorage about a mile away. We sat in the cockpit that evening admiring the beauty and watching the intense storms rolling through to the north of us.

Suddenly, a rogue storm cell looked to be breaking from the main pack and heading in our direction! We quickly began gathering electronics, cushions, and anything else that might fly. Just as we were heading down the companionway, the storm wall hit us. We estimated wind gusts of more than fifty-miles per hour! Dejarlo is a big boat, and little affected by a little gust here and there. However, these winds put Dejarlo on her side at about thirty degrees and spun us around like a Tonka Toy! All we could do was hang on and wait for things to settle down. It sure got our attention! The high winds lasted about sixty seconds, it rained for an hour, and then it turned into a beautiful evening.

The next morning, after breakfast and coffee, we pulled up anchor and headed up Goose Creek, then across the Pamlico River, on our way into Belhaven, NC. We spent two nights at the small marina. We had originally planned on one night but were concerned about bad weather the next day. Of course, the forecast was wrong as that second day turned out to be beautiful. We made use of the time by walking around Belhaven and doing laundry. 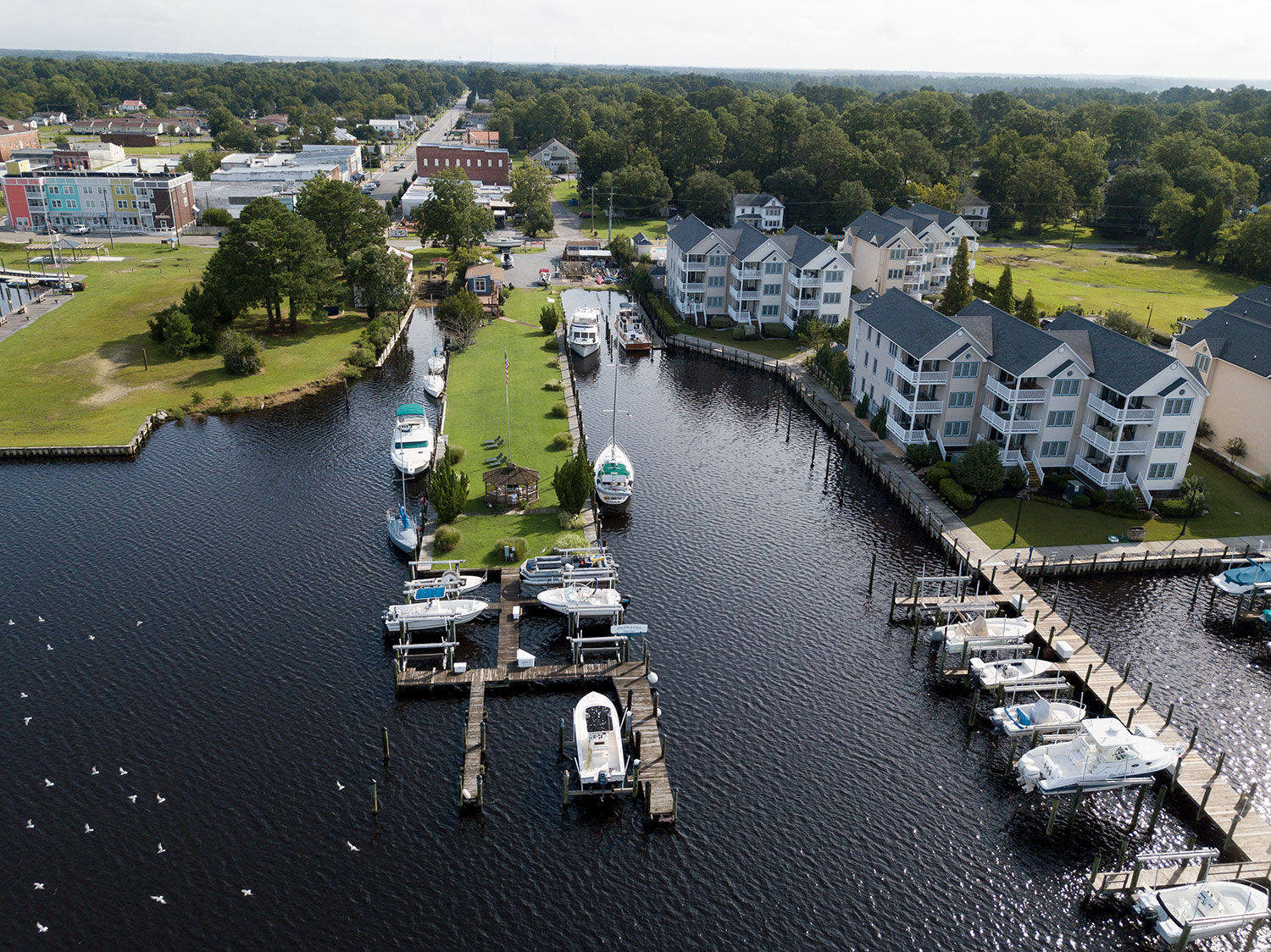 Our small marina in Belhaven, NC. [Click on image to enlarge]

We departed after two days, heading first to a marina a half-mile north for fuel and a pump out before heading back out into the wide-open Alligator River.

Here’s a quick little timelapse video of our departure from our marina, then to the fuel dock of the other marina, and then out into open water.

Ten miles from the Belhaven breakwater, we entered the Alligator and Pungo River Canal, a 22-mile canal. It is long, narrow and very straight except for one 30-degree left hand turn. This was a long, hot and boring day! Our planned anchorage for the night was just a couple of miles after the exit from the canal, and we couldn’t wait. We saw less than a handful of boats, passed under two bridges and saw a little bit of wildlife. Other than that, it was a long hard slog. Here’s another time lapse of some of our time in the canal.

Jane listening to NPR in the Alligator and Pungo River Canal. [Click on image to enlarge] 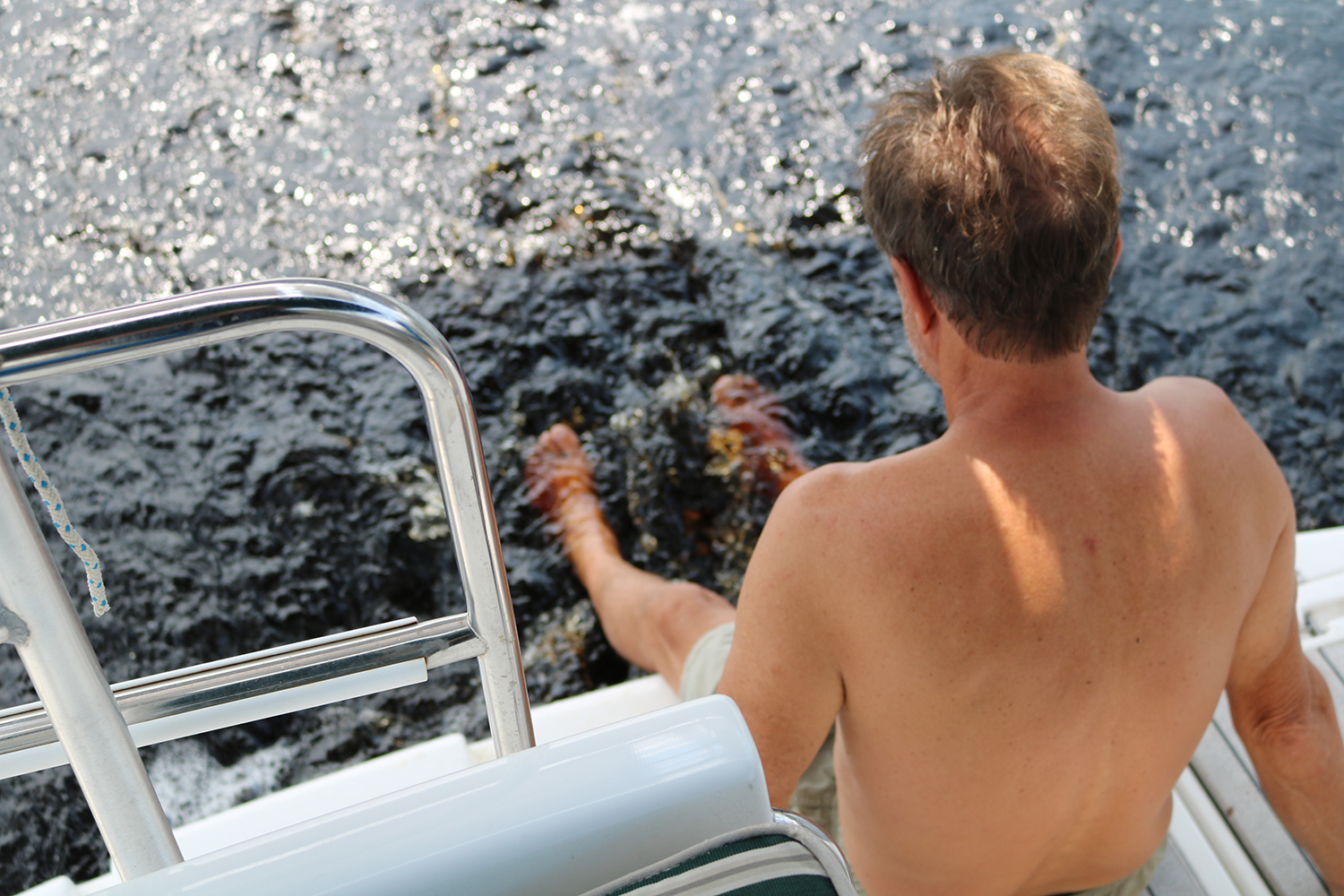 A quick dip of the feet provides welcome relief from the heat while underway (as long as John doesn’t fall off the back). [Click on image to enlarge] 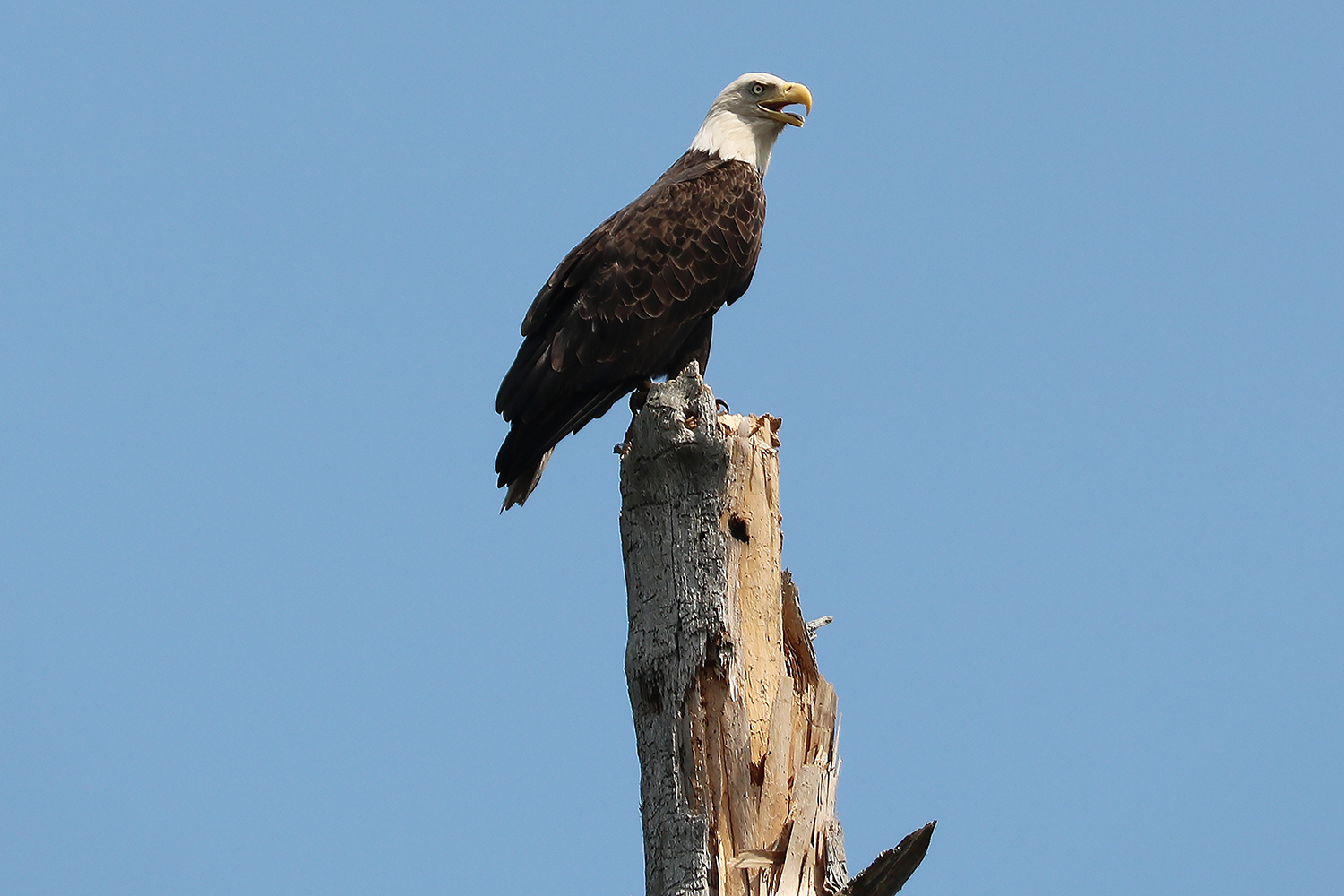 Some of the wildlife along the way. [Click on image to enlarge]

Our anchorage for the night was an area just off the ICW called Deep Point. Like most of our anchorages, it was beautiful. We were all alone for a couple of hours until a small trawler joined us about a half-mile away. We had a glass of wine, a nice meal and settled in for the evening. 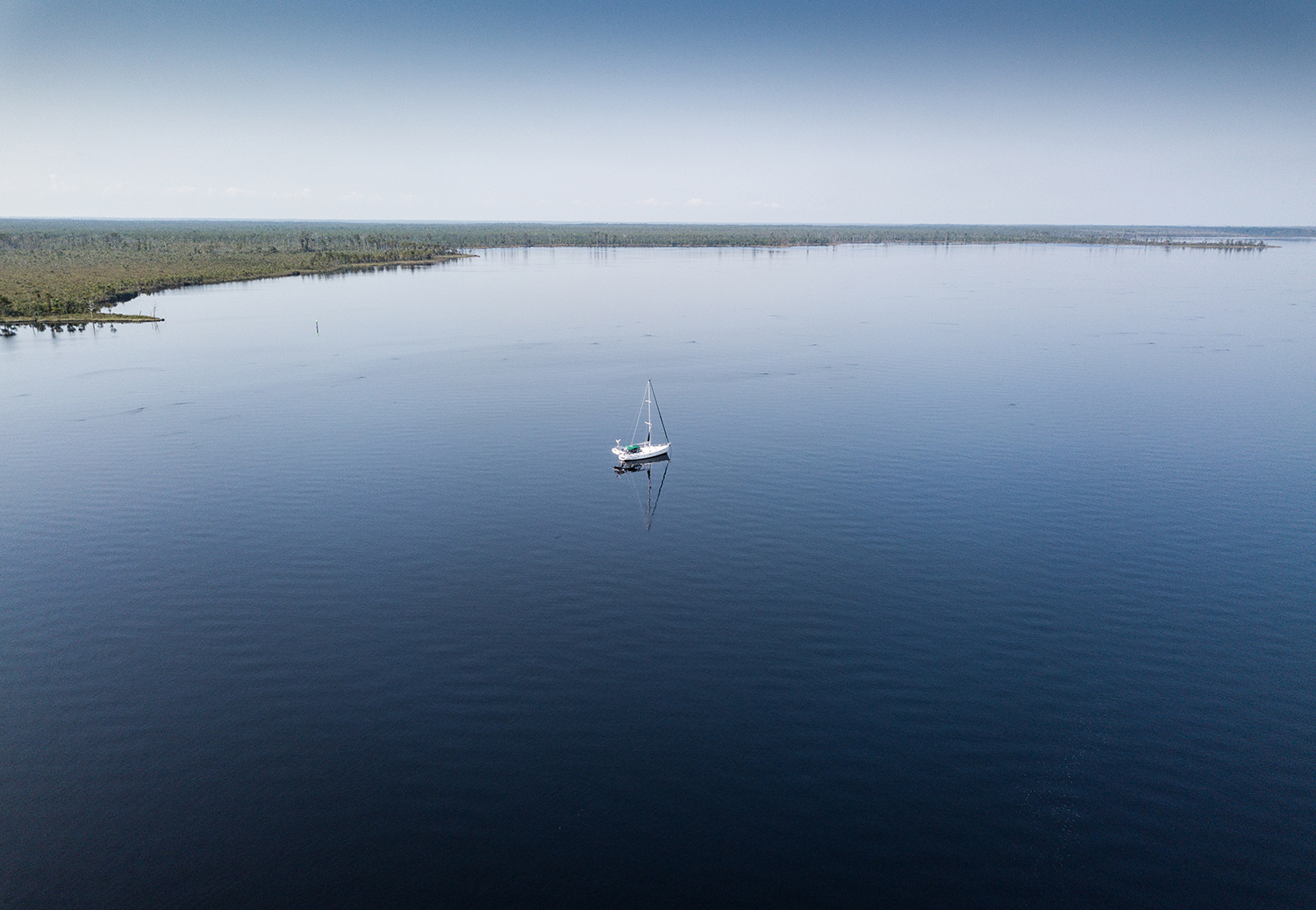 The view we enjoyed that evening as the sun settled on the horizon was nothing short of spectacular! 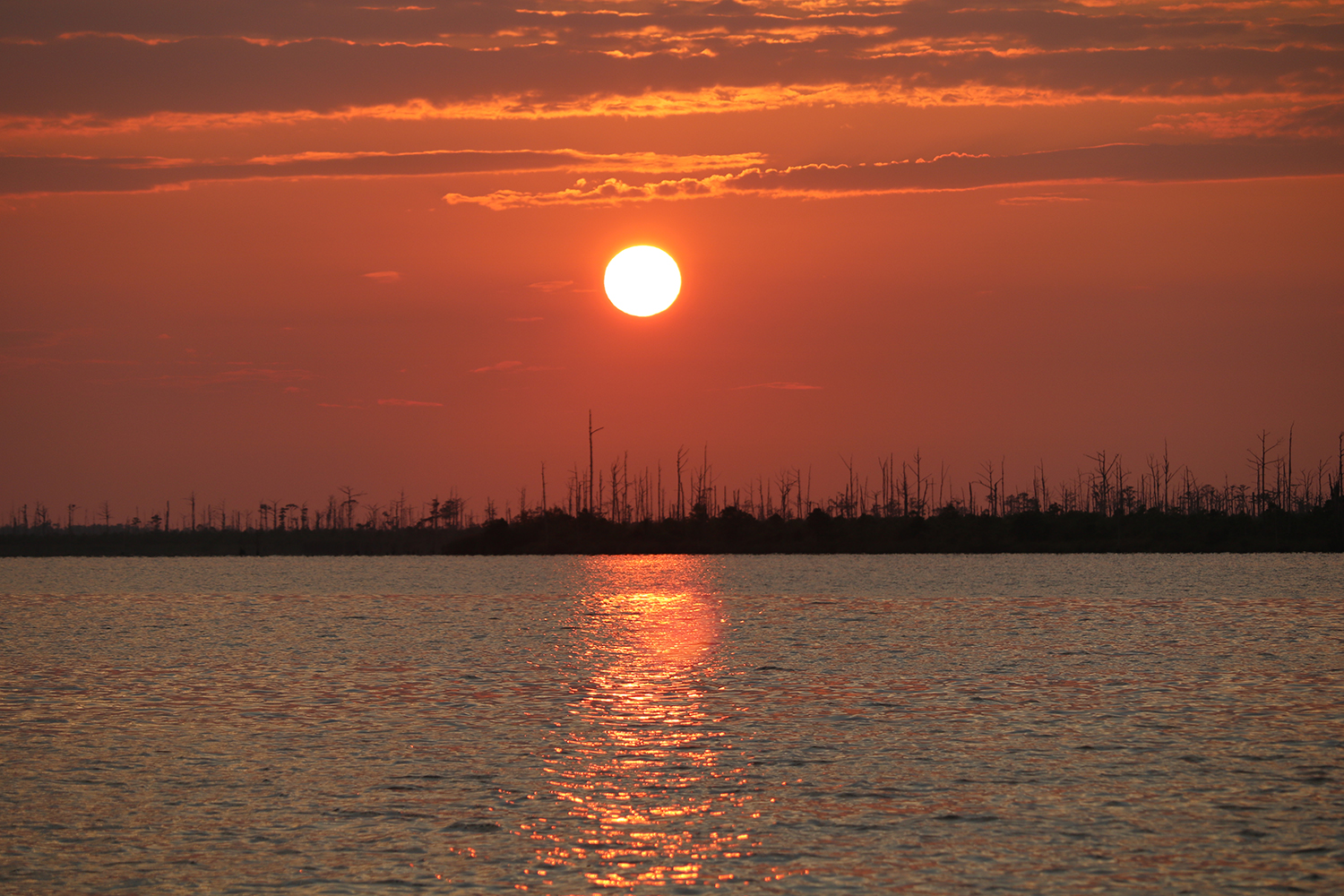 Sunset at Deep Point. [Click on image to enlarge]

And then the air show began! About five miles from our anchorage is the Dare County Bombing Range, a Navy bombing range used primarily for the training of F/A-18 Hornets. Of course, on this date they were practicing night bombing, and their flight path into the bombing range was right over our anchorage, at low level!

It turned out to be fun watching the Navy boys in action, and they returned to their base at around 10:00 allowing us a full night’s sleep.

The following day we continued north up the Alligator River, settling in at anchor at the north end of the river and staged for the following day’s fourteen-mile crossing of Albemarle Sound. We’ll arrive in Elizabeth City that night and spend time celebrating Jane’s birthday and preparing for our passage up the Dismal Swamp.

We’ll have more on that portion of our trip later.