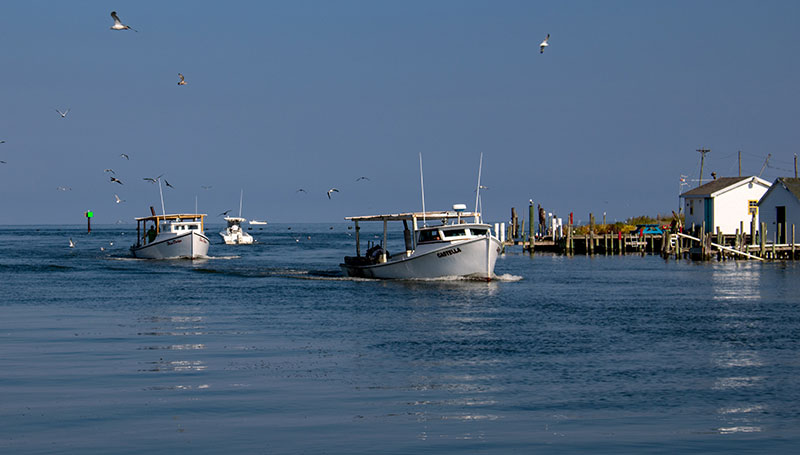 Having spent two thoroughly enjoyable days at anchor in the East River off Mobjack Bay, Virginia, we made our way back out into the Chesapeake and headed towards our next destination, Deltaville, Virginia. While we were only a little more than ten miles “as the crow flies” from Deltaville, our route would take us out of our anchorage in the East River, into Mobjack Bay, out into the Chesapeake Bay, north along the coast of Virginia, into the Piankatank River and up Jackson Creek to arrive at Deltaville Marina – a total of thirty-one miles by boat!

We’d been giving some thought as to where we would stop for the season and put Dejarlo in storage for the winter. Several people had suggested Deltaville, and we wanted to see the location and make some arrangements. And after several days visiting Deltaville we were certain that we’d return in a few weeks for haul out and storage. But first, we wanted to continue our exploration of the Chesapeake Bay with visits to destinations north and east of Deltaville.

Note: We later changed our minds and chose instead Spring Cove Marina in Solomons, Maryland for winter storage of Dejarlo.

Tangier Island, on the eastern shore of the Chesapeake, had been on our list of places we wanted to visit for a long time. Years earlier we had read the articles and watched the videos profiling this interesting island. To get there, we would need to cross from the western shore of the Chesapeake, to the eastern shore. From Deltaville, we checked the charts for a location on the western shore that would provide the shortest distance across the Bay. This turned out to be Reedville, Virginia, another small, well protected fishing community that we assumed had nothing interesting for us. Were we ever wrong!

Although small, Reedville, is one of the more interesting locations we’ve visited so far. We spent two days anchoring in the area and enjoying the friendly residents and beautiful homes. This place is on our return list for next year. 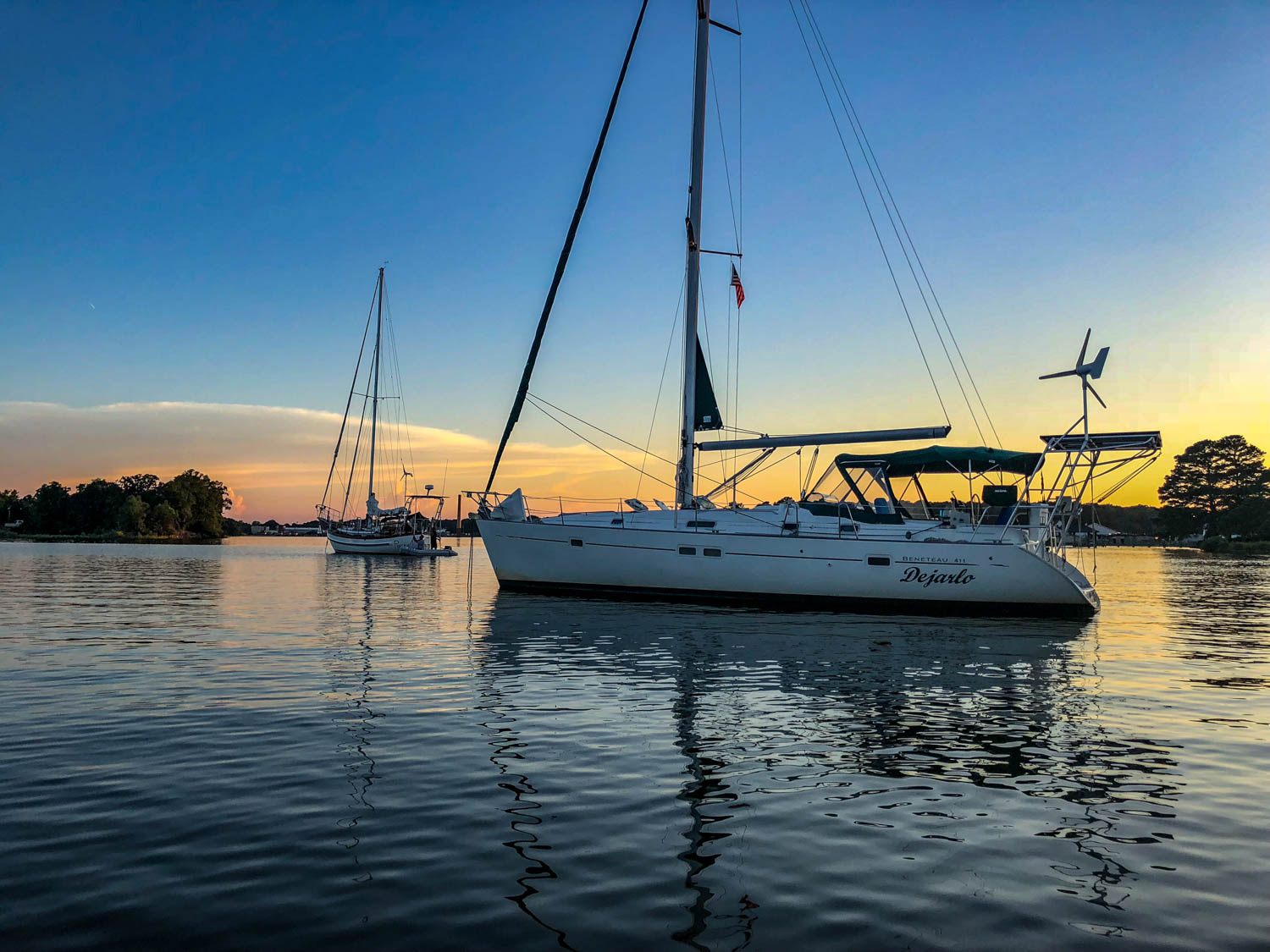 Dejarlo at anchor off Reedville, Virginia. 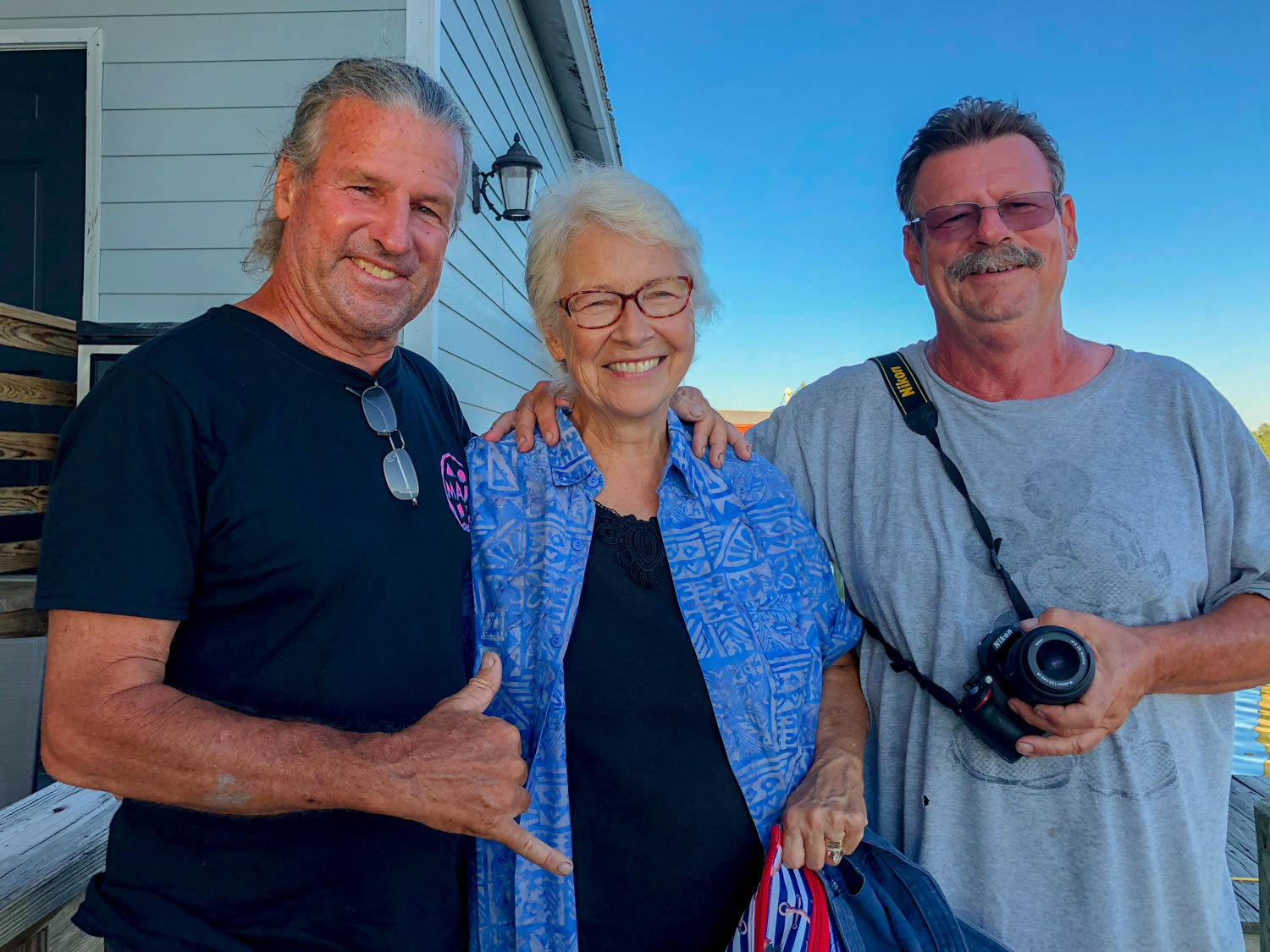 Jane with fellow cruisers after a wonderful dinner in Reedville, Virginia.

After a couple of days relaxing in Reedville, the weather looked good for the eighteen-mile passage across the Chesapeake to Tangier Island. This was to be our longest crossing so far, and we were a little apprehensive. Although we weren’t going to lose sight of land, a lot can happen in eighteen miles. It turned out we had nothing to fear as our Navionics navigation app on the iPad accurately pointed the way and we settled in for the three-hour crossing with the auto-pilot steering the way. Soon after departing Reedville and making our way into the Chesapeake, we could see the water tower on Tangier, so we knew we were headed in the right direction.

Upon arrival, we made our way into the marina area and, with the assistance of eighty-seven year old proprietor Milton Parks, we tied Dejarlo into our slip at Parks Marina. 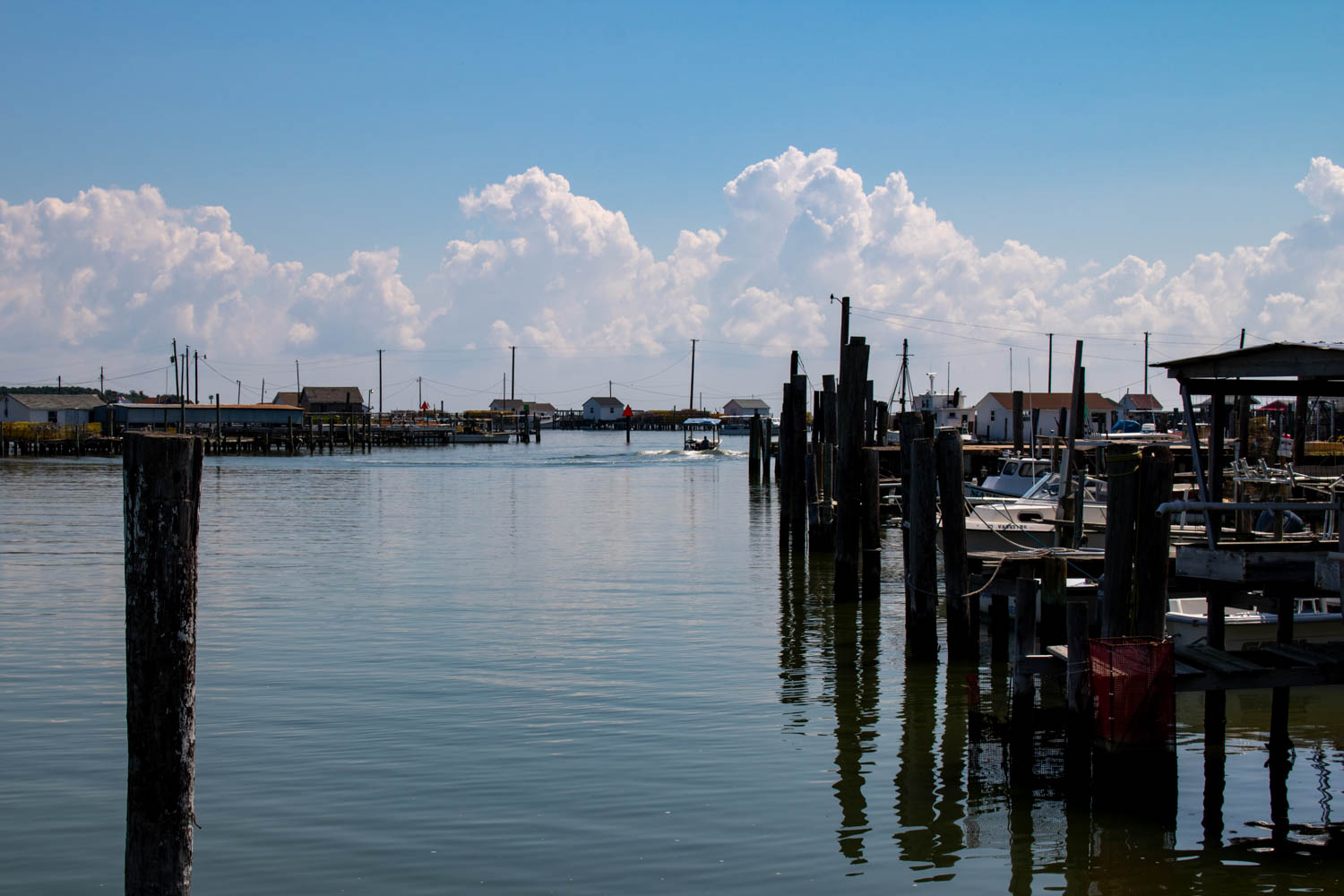 The view from our slip towards the busy crabbing community of Tangier Island. 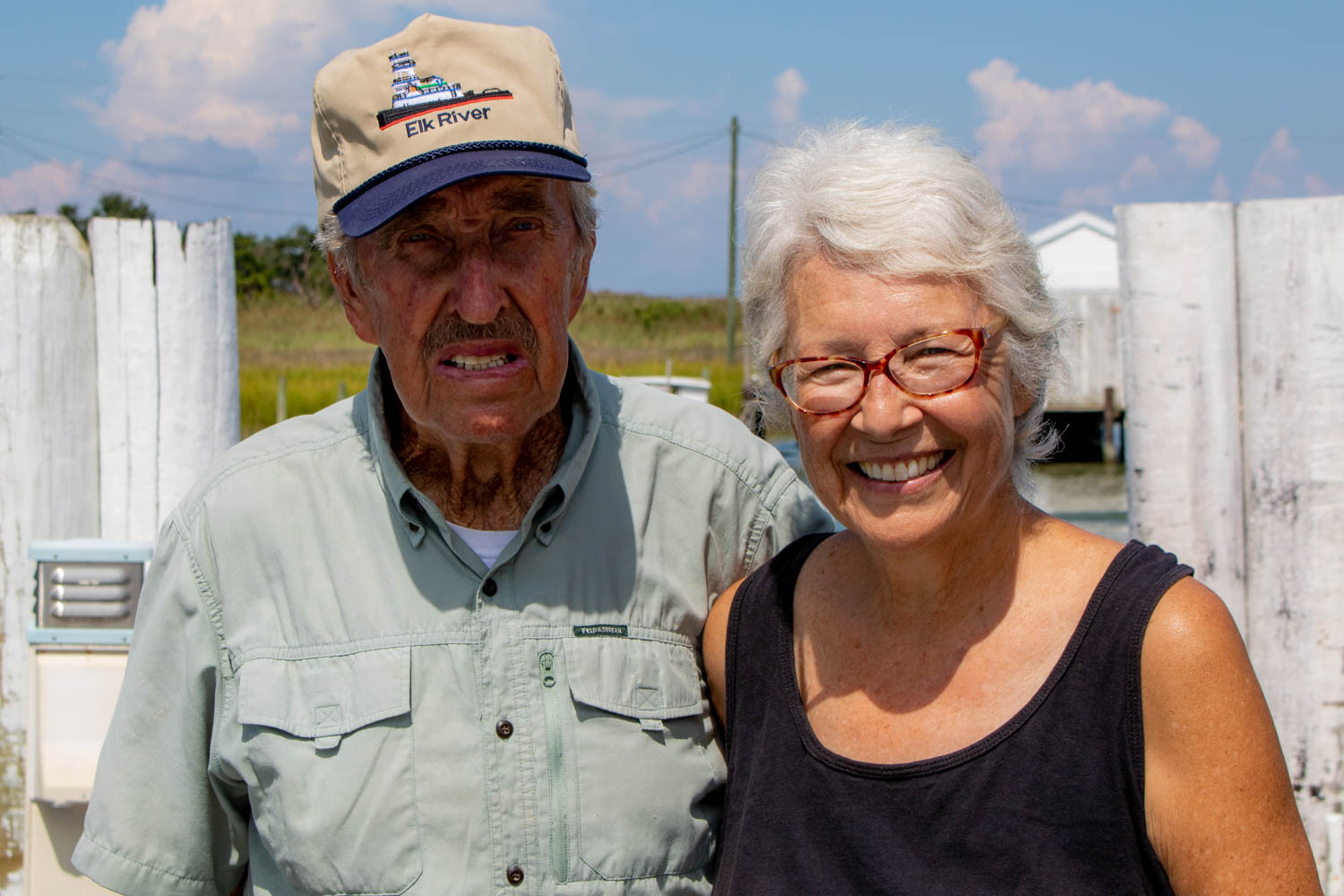 Tangier Island has been much in the news lately. You see, it’s quickly disappearing as rising waters brought on by global warming are having a profound impact on this small, fragile island. Since 1850, Tangier island has lost two-thirds of its landmass. It’s estimated that within the next fifty years much of the remaining island will be underwater and the island will be lost.

But these hardy crab fishermen aren’t going down without a fight. As a matter of fact, they’re screaming for assistance from whomever will listen, including Donald Trump himself, who received 87% of the Tangier votes in the 2016 election!

We spent two wonderful days on the island walking, touring by golf cart and eating the local crab. What a wonderful experience.

If you ever get the chance, you must pay Tangier Island a visit. There’s a ferry from Reedville almost every day. But hurry, the island is disappearing fast!

I had an interesting experience soon after our arrival that provided some perspective on the shallowness of the island waters. We had just tied up in our slip at Parks Marina when I noticed a small power boat in front of our bow trying to depart its tight space while fighting the strong tidal currents sweeping through the marina. I decided to hop off Dejarlo and lend a hand. I climbed aboard an adjacent power boat and attempted to push them off the dock. In the process, I lost my grip and fell into the water while desperately hanging onto the outboard engine. As I fought to maintain my grip on the slippery outboard, the strong currents were doing their best to rip my fingers free, sweep me under the docks and through barnacle-encrusted pilings.

I remember thinking to myself, “Could this be it for me? Is it all going to end right here on Tangier Island?”.

Just as my fingers lost their desperate grasp on the outboard, and I was about to begin my out-of-control journey under the “dock of death”, I felt something solid graze my foot. Upon closer examination I realized I was “swimming” in four-feet of water! I placed both feet firmly into the muddy bottom and walked ashore. How embarrassing! 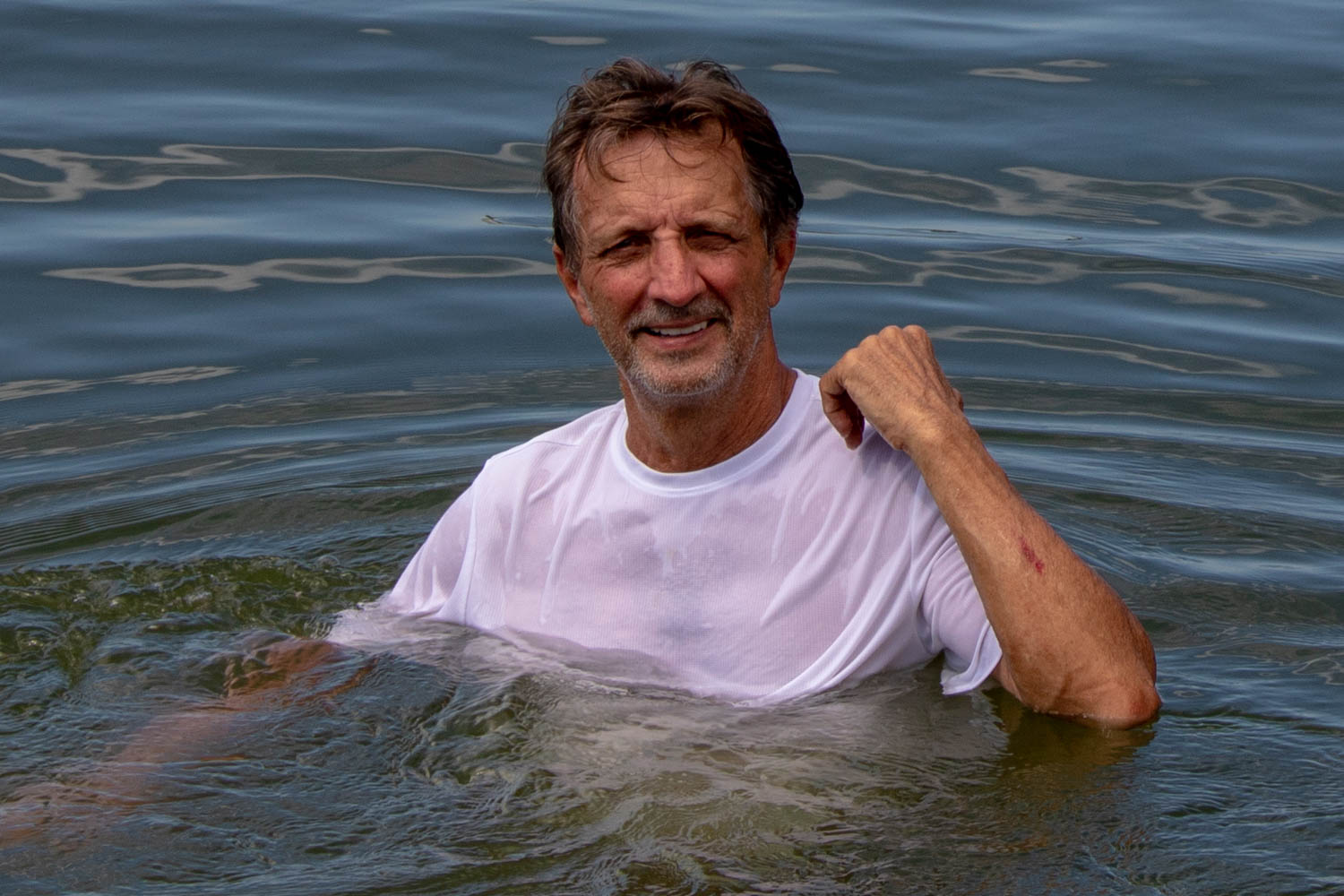 An embarrassing chuckle after my “near-drowning” tumble into the shallow waters of Tangier Island. 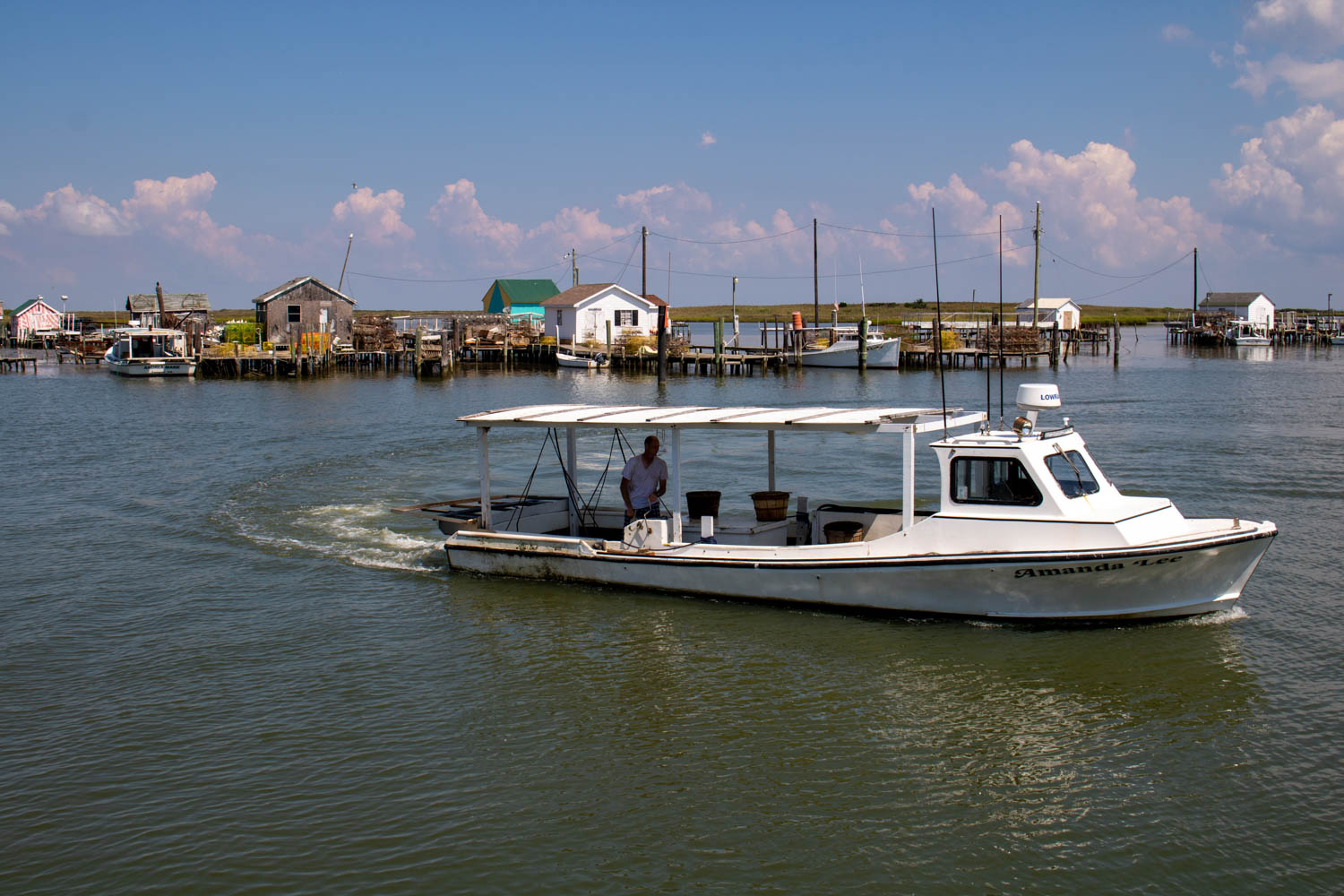 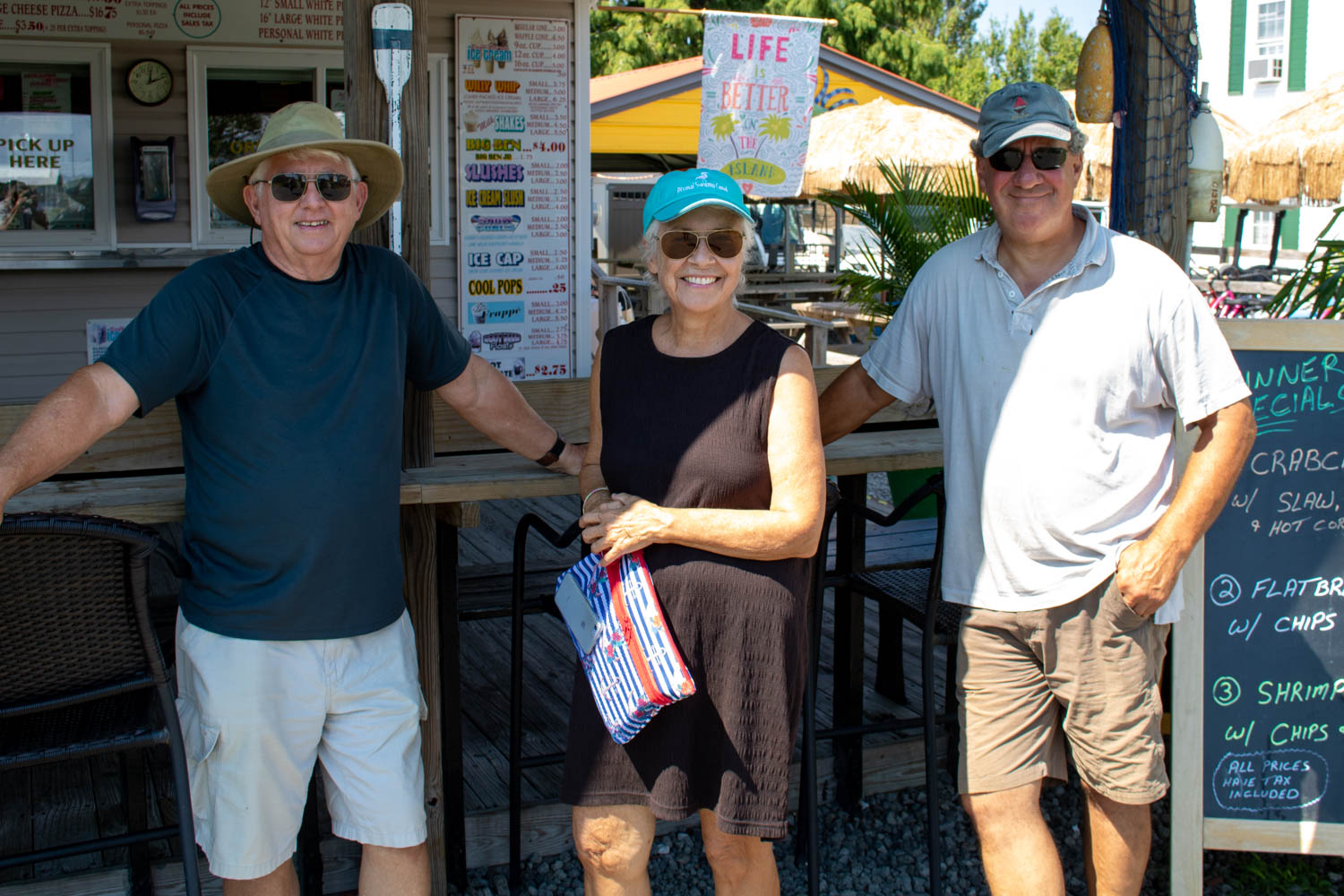 A walking tour of the island with some fellow cruisers we met at the marina. 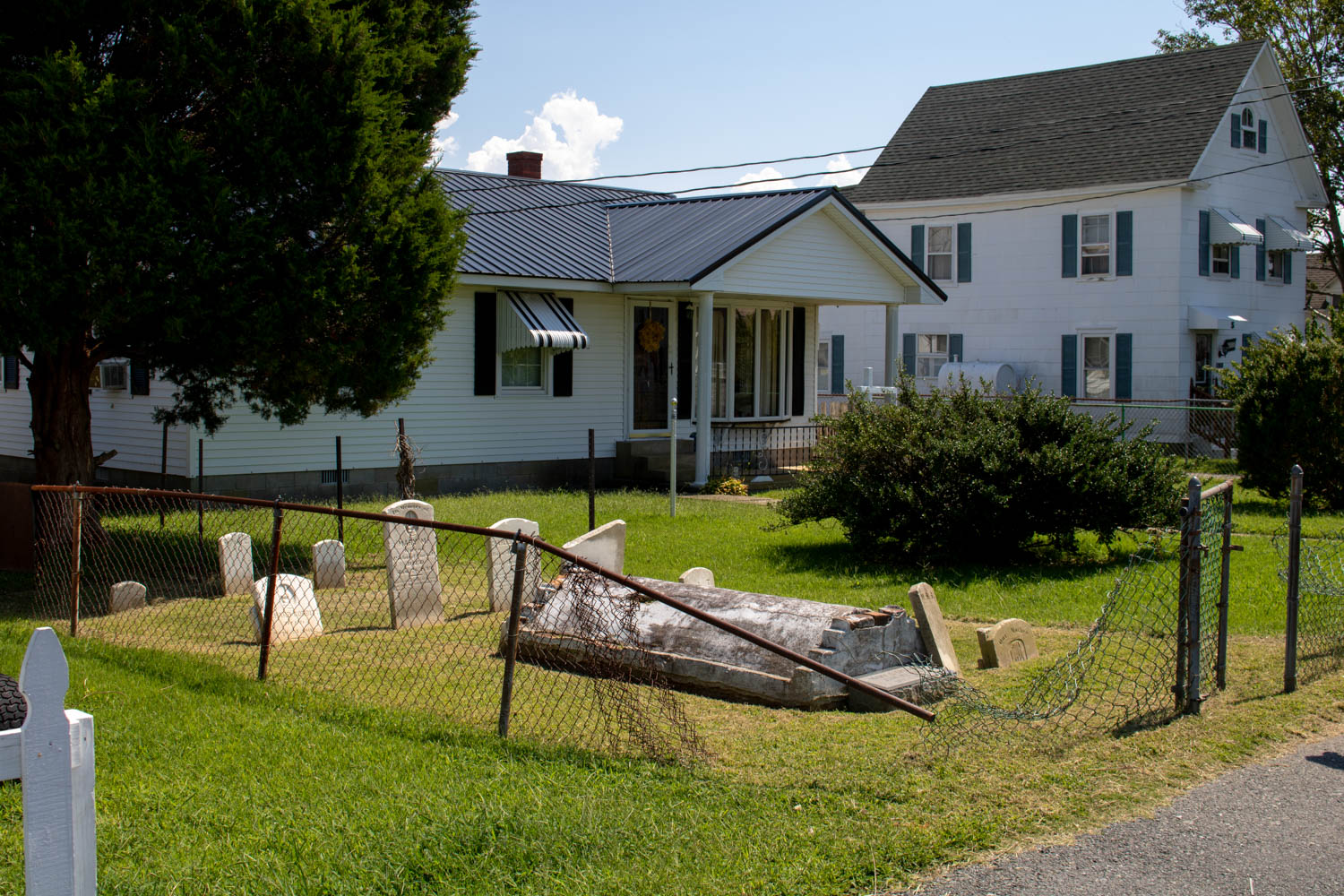 Due to a shortage of cemetery space on Tangier, it’s not unusual to find family burial plots located in the front yards of the homes of surviving family members. 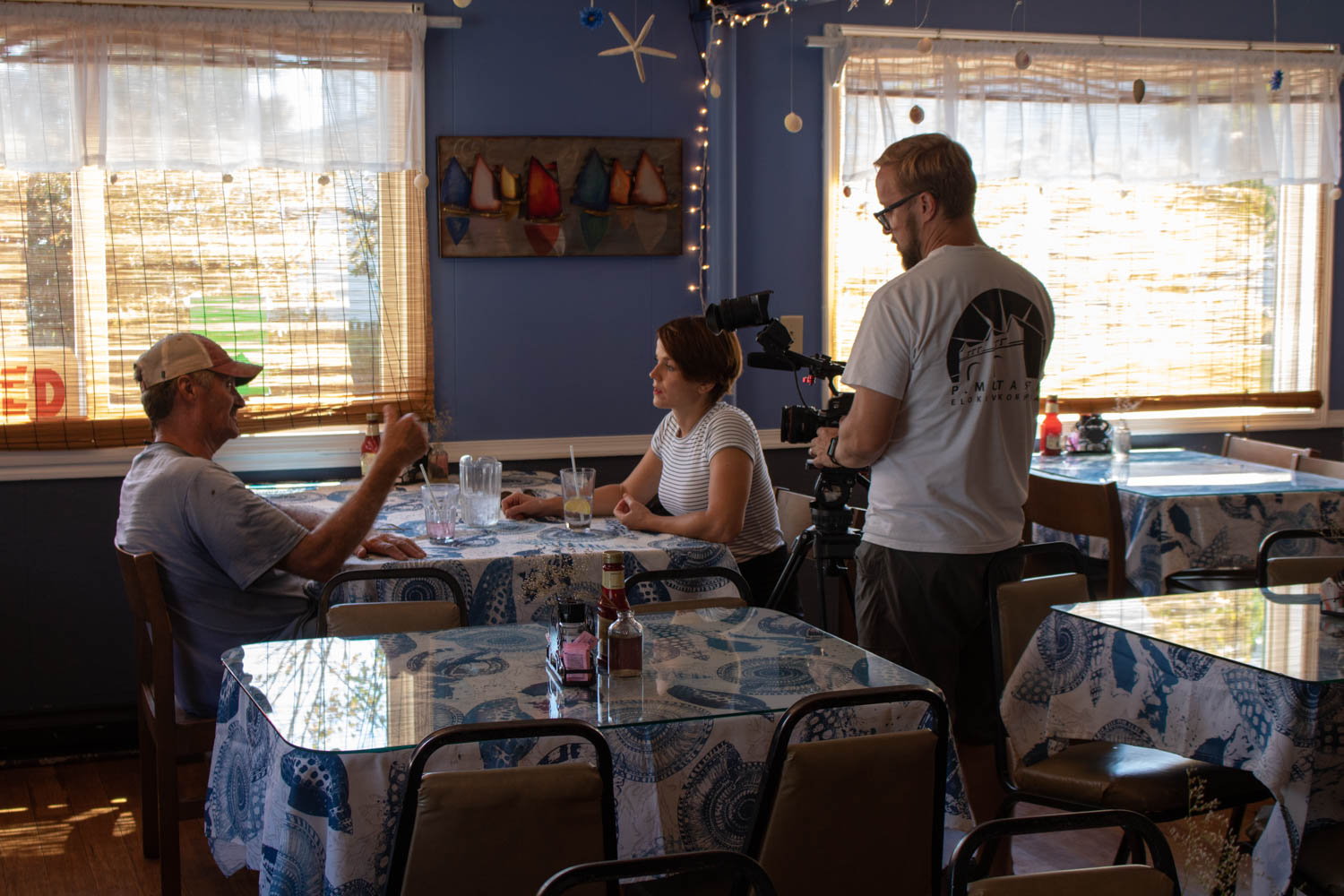 The mayor of Tangier Island being interviewed by a film crew from Finland producing a documentary of life in the U.S., including Tangier. 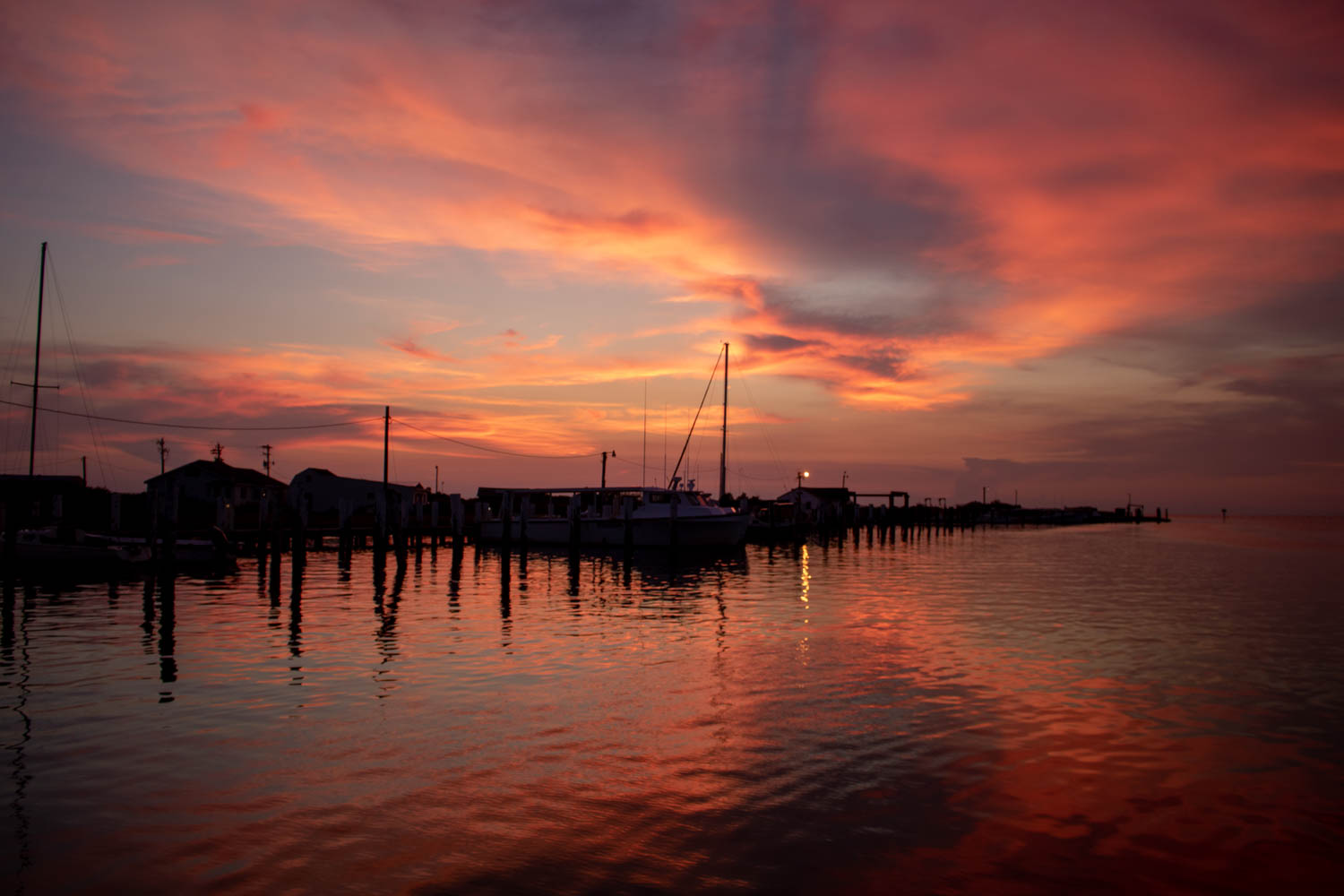 After two wonderful days on Tangier, it was time to say goodbye to new friends and head back across the Chesapeake. Our next destination was Solomons, Maryland, where we had guests arriving from St. Louis and Vero Beach, Florida. The sail to Solomons would require an intermediate night at anchor after our transit across the Bay. We chose an area at the mouth of the Potomac River, just off Point Lookout, called Cornfield Harbor. Cornfield Harbor isn’t a harbor, but instead a large area open as an anchorage. And this is where we learned of the profound variance between the National Weather Service wind forecast, and that of the actual wind speed and direction.

On the charts, it’s clear this is an anchorage to be avoided when the winds are out of south. With a huge fetch into Cornfield Harbor from across the wide Potomac, it would make for a miserable night. But the National Weather Service assured us that the winds that night would be light, and out of the NORTH, providing plenty of wind protection from the shoreline!

We set the anchor, poured ourselves a sundowner, and settled in for a good night of sleep.

And then, over the next few hours, we watched in horror as the winds increased and clocked around to blowing out of the SOUTH and directly into our anchorage. By that time, it was dark and much too late to pick up and move across the wide Potomac to protection. We spent a miserable night watching the anchor alarm, much aware of the dangerous lee shore to our north, and feeling like we were riding a bucking bronco. Another lesson learned!

The following morning, we quickly retrieved the anchor and continued the remaining thirty miles into Spring Cove Marina at Solomons, Maryland, anxious for a good night of sleep. 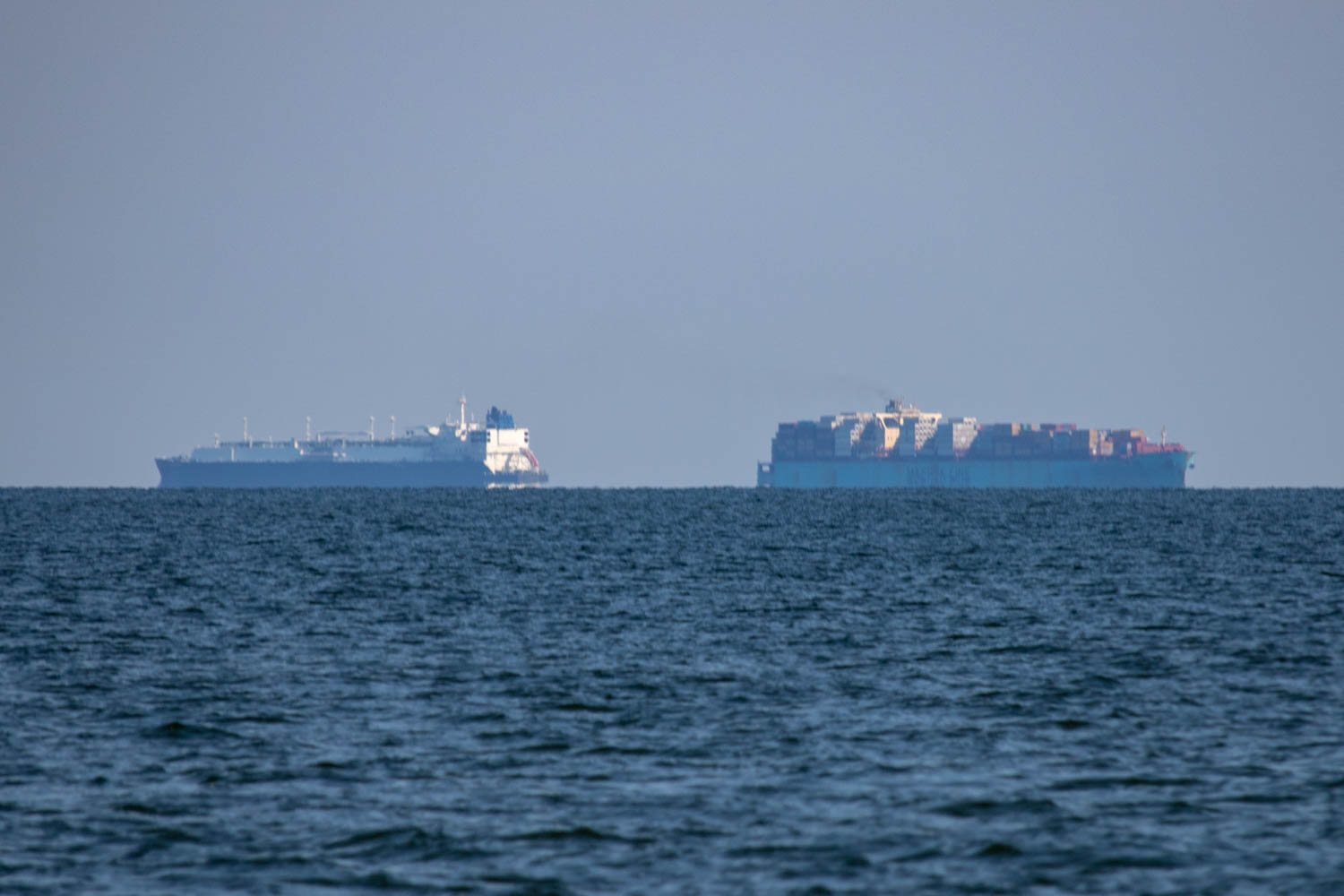 Large container ships passing off our starboard beam. With lots of commercial activity throughout the Chesapeake, it’s not unusual to see large ships on the horizon. 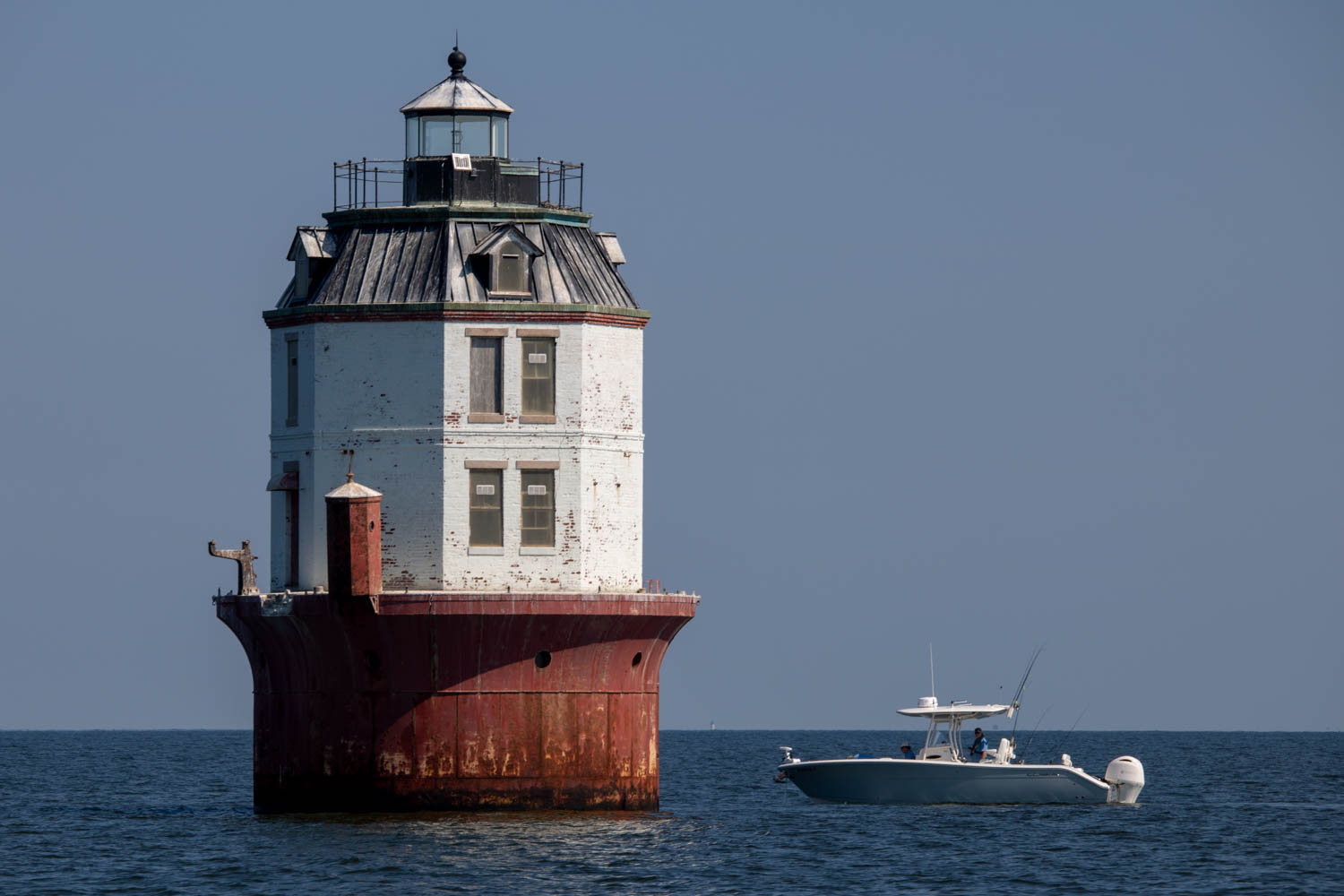 An old abandoned lighthouse far out in the Chesapeake. 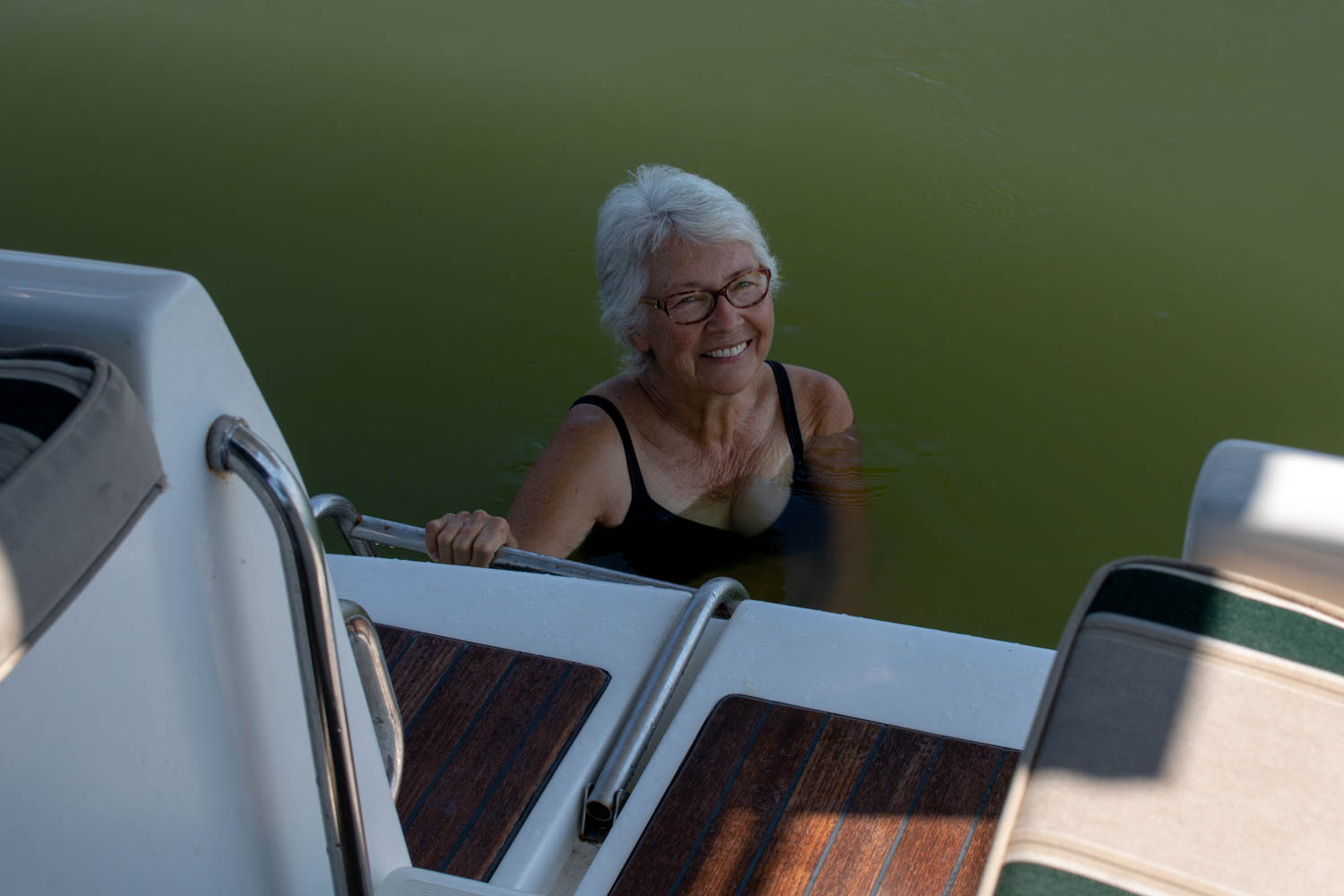 After a long, hot day crossing the Chesapeake, and while at anchor in Cornfield Harbor at the mouth of the Potomac River, Jane decides to cool off with a quick dip off the back of the boat. Little did we know of the excitement we would experience that night after the sun went down.

Aircraft Carriers, Destroyers, Submarines and a Beautiful Hideaway in the Chesapeake

Our Reluctant Return to Land Life … But Only for the Winter!