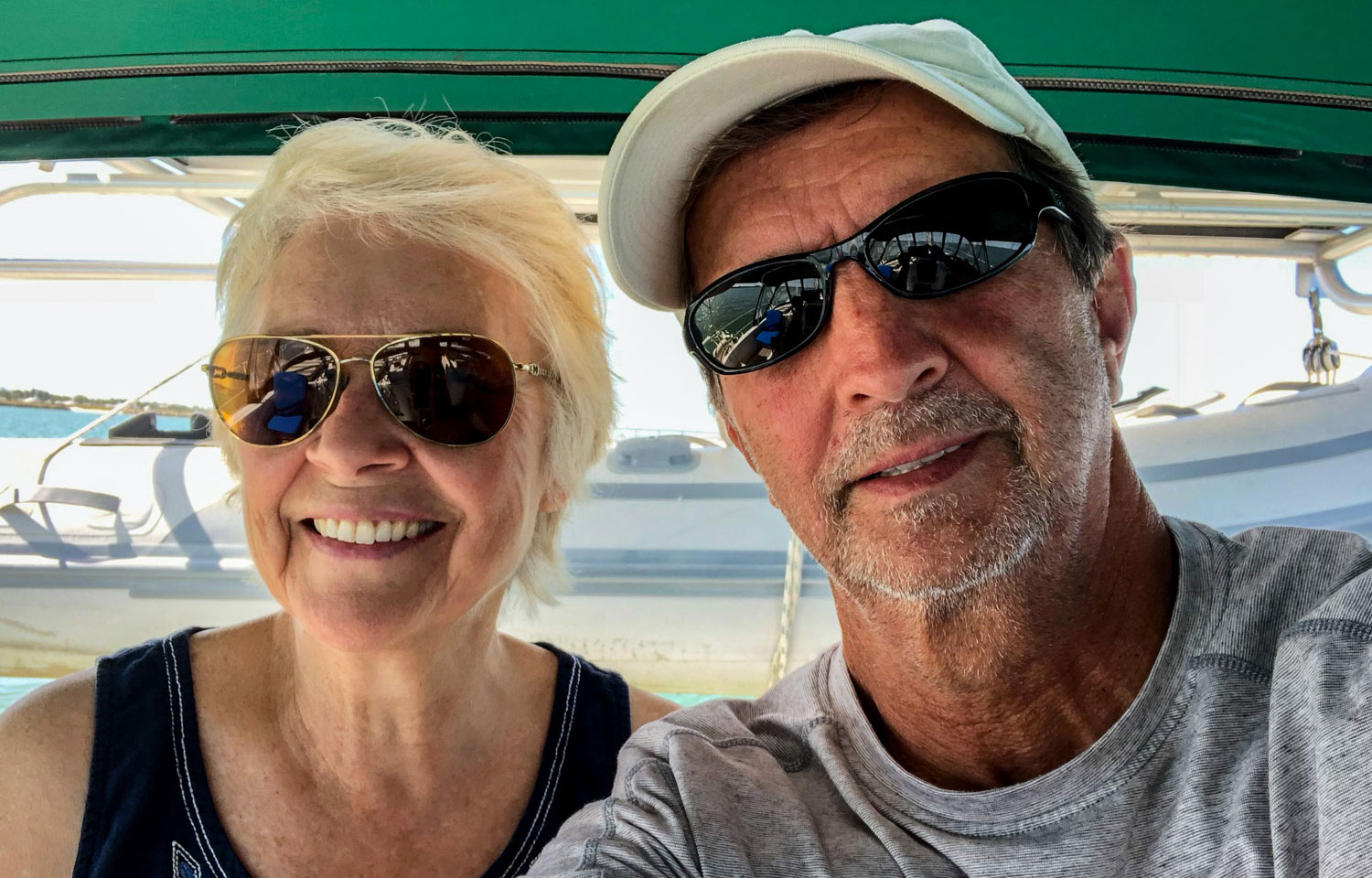 The alarm sounded at 2:30 am. Ordinarily, the sound of an alarm at this hour of the morning would have startled me awake. However, I hadn’t slept a wink since my head hit the pillow 5-1/2 hours earlier. Jane and I were about to undertake a 75-mile offshore passage from Key Largo, Florida to the island of North Bimini in the Bahamas. Ordinarily, a 75-mile passage would be no big deal for us. We had done several 75-mile offshore passages while cruising up and down the U.S. east coast. This time, however, we had to deal with the dreaded Gulf Stream, a strong north-flowing current originating in the Gulf of Mexico and following the eastern coastline of the U.S. The stream averages 50 – 60 miles wide, with a current averaging about 2 knots.

I’d been agonizing about this Gulf Stream crossing for months. I’d read articles warning of its dangers. I’d gone to seminars presented by experts on Gulf Stream navigation. I’d watched YouTube videos and talked to dozens of fellow cruisers from around the marinas who had done it dozens of times. I’d spent hours studying my charts while carefully calculating a course and heading to compensate for the anticipated current speed. I’d fully prepared. I was nervous as hell!

(Note to reader: At least on this passage from Key Largo, it turned out to be no big deal. Just point the boat towards Bimini and make some minor heading adjustments along the way to stay on a straight-line course to Bimini. Piece of cake; easy sneezy.)

A good weather window is without question the most important aspect of a successful Gulf Stream crossing. Winds that come out of the north will conflict with the north-flowing Gulf Stream and can produce waves the size of railroad box cars. So, it’s important to sit patiently and wait for the right weather conditions. Sometimes this wait can last several weeks. We’d waited about ten days in Key Largo for the optimal conditions. We’d contracted the services of a professional meteorologist (Chris Parker) to tell us when to go. He was telling us to go … now! The winds were light out of the southeast and the waves in the Atlantic were forecasted at 2-4 feet, 8 seconds apart. These were good conditions for Dejarlo and her crew. We had a one-day window. Let’s go!

We had purchased Dejarlo three years ago, always with the intention of taking her to the Bahamas, and points beyond. Since our first trip heading north to the Chesapeake from Florida in early May, 2018, we’d traveled more than 4,000 miles along the coast – from Fort Pierce, Florida to Solomons, Maryland to Key Largo, Florida, back to Solomons, Maryland, and finally back to Key Largo. For those that have followed this blog, you know that our first trip to Key Largo in 2020 was for the purpose of crossing over to the Bahamas. As (bad) luck would have it, just before our departure, the Bahamas closed its borders due to the Covid pandemic. We spent almost three months anchored off Key Largo before making the long trip back up to Maryland, our home port during hurricane season.

Now we’re back at Key Largo, ready to try again. This time it looks like we’ll make it. The required Covid tests necessary to enter the Bahamas are completed, we’ve provisioned the boat to overflowing, and all the necessary paperwork is in order. The only requirement now is to start the engine and make our way out of our anchorage, cross over Molasses Reef five miles to the east of us, and head out into the Atlantic Ocean.

We pulled up anchor at 4:00 am, making our way east while carefully monitoring our Navionics navigation app displaying our GPS position. It was pitch dark! We were all alone except for a couple of early morning fishing boats heading out past the reef. An hour later we were in the open Atlantic. I pointed Dejarlo towards Bimini and settled in for, what turned out to be, a twelve-hour passage.

There was no wind, so sailing was out of the question. We motored the entire trip. The downside to having no wind is not being able to sail. On the flip side, no wind ordinarily means very small waves. And that is exactly what we experienced, very small waves. That is with the exception of the fifteen-foot high “rollers”, spaced about twenty seconds apart, that turned out to be rather fun riding up and down, kind of like a roller coaster.

As soon as we were in the Gulf Stream, I noted a couple of degrees increase in sea temperature along with a very notable change in water color – to a color somewhere between turquoise and emerald green, with some occasional cobalt blue mixed in. We saw very little marine traffic except for a few cargo ships that never got more than a mile or so from us. However, our fancy AIS system (similar to an aircraft transponder system) indicated several vessels, both commercial and pleasure craft, within ten miles of us, some clearly also headed to Bimini.

About five miles out from Bimini, I called out “land ho”, as I could clearly see the entrance to Alice Town on North Bimini.

An hour later we were tied up at the Bimini Big Game Club Marina, handling Customs and Immigration forms, and preparing for a long night of much needed sleep.

After three years of boat refits, repairs, and 4,000 miles of coastal cruising, we were finally in the Bahamas!

This place is filled with history. As I write this blog post from the comfort of Dejarlo’s cabin, I’m reminded that less than twenty-five yards from me is the, now in ruins, cabin where Ernest Hemingway stayed during his many visits to Bimini. He kept his famed fishing boat, Pilar, just a short distance from where Dejarlo now sits. From his many visits here came the inspiration for his books, Islands in the Stream and The Old Man and the Sea. If you use your imagination, you can still hear Hemingway’s boisterous laughter coming from across the road as he recalls the day’s fishing adventures with his Bahamian drinking buddies.

We’ll be here for about a week as we enjoy the local Bahamian culture and wait for a good weather window to continue our journey further east across the Bahama Banks to the Berry Islands, and waypoints beyond. We’ve got about three months before we must return to the States and settle in somewhere for hurricane season. We should be able to see lots of the Bahamas in three months.

More on our Bimini experience later. Perhaps Hemingway’s ghost can inspire my next post.

A word from Jane regarding the Commonwealth of the Bahamas …

What do you think when you hear those words? Most think of sandy islands, fifty shades of blue water, warm breezes, swaying palms, pastel-colored homes and buildings, and friendly islanders.

Yes. That’s it, all those words and, we suspect, many more to come.

Some history of the Bahamas:

We all know the story of Christopher Columbus (and his three famous ships) discovering America. Most historians now say no, that was already accomplished by others well before 1492. Columbus left Spain and reached a Bahamian island, probably San Salvador, and sailed around other nearby islands, Cuba, Hispaniola, and twenty years later America’s east coast. Then came invaders, sugar cane plantations, enslavement, traders, privateers, pirates, abolishment of slavery in 1834, and independence from Britain as a constitutional monarchy in 1973. History is everywhere on these islands.

And us? We’re pretty awestruck and ready to go as soon as the next two high wind events have passed and the weather gods have cleared the way.

Heading South to the Warmth of Tropical Waters … Again!