We left Melbourne Harbor Marina at about 10 am on a cloudy, misty day, headed north. Our goal was Halifax Harbor Marina in Daytona Beach (a three-day trip that turned out to be two) where we had plans to meet with a boat electrician to deal with some wiring issues. We had noted some bizarre electrical behavior before arriving in Melbourne that affected our instruments – particularly our depth indications – and the solenoid controlling the propane gas feed to our galley stove. After a trip to Ace Hardware for some gas line parts, I was able to solve the propane issue by removing the electric solenoid from the connection. However, the lack of accurate depth measurement remained a problem needing to be solved. While my Navionics charts are very good at showing me shallow water, I didn’t want to go without depth measurements much longer.

The objective for our first day was a mooring field in Titusville. Melbourne to Titusville takes you past Cape Canaveral and the Kennedy Space Center. As you are transiting up the ICW, you’ll spot the NASA Vehicle Assembly Building (VAB) from far off. It was designed to assemble large space vehicles, particularly the Saturn V rocket and is one of the largest buildings in the world, and the largest single-story building. The sight of this historic building remained on our skyline for many hours. 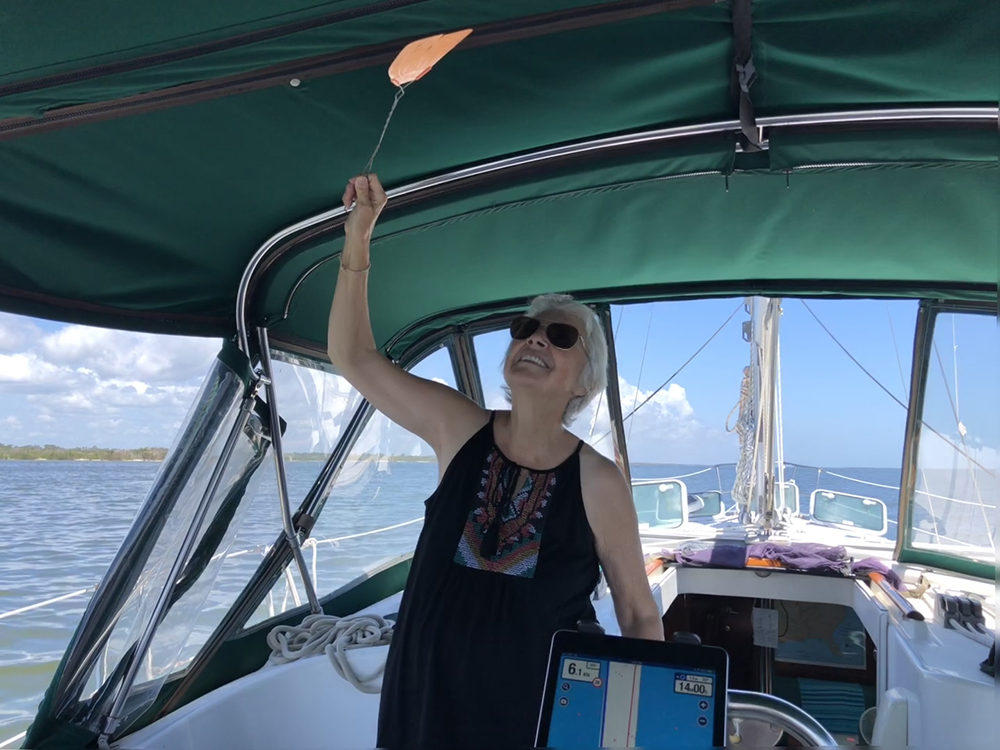 Jane swatting the nasty, biting horse flies that followed us several miles up the ICW.

Travelling the ICW is kind of like playing “connect the dots”, where you head for the next ICW designated green marker (if heading north), then the next, and the next, etc., etc., etc. You coordinate this pattern with occasional glances at the electronic chart plotters at the helm. Every once in awhile, there’s a low bascule bridge that requires a call on VHF channel 9 to request an opening. But, fortunately, most of the bridges on this portion of the ICW are 65’ in height and we motor under easily. The trip along the way sometimes takes us pretty close to the docks and homes lining the waterway. We frequently get passed by motor boats, and occasionally see commercial traffic. All in all, motoring the ICW in this part of the country can be rather routine, with moments of excitement (like seeing the NASA VAB), or even sheer terror (more on that later). 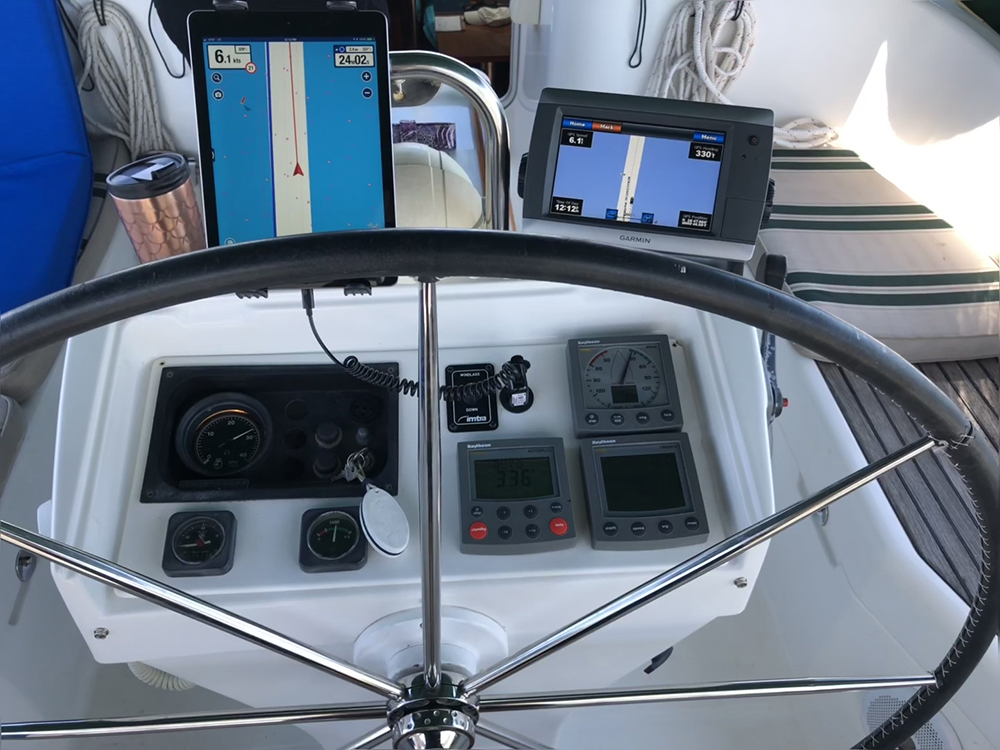 Our “electronic” view at the helm. 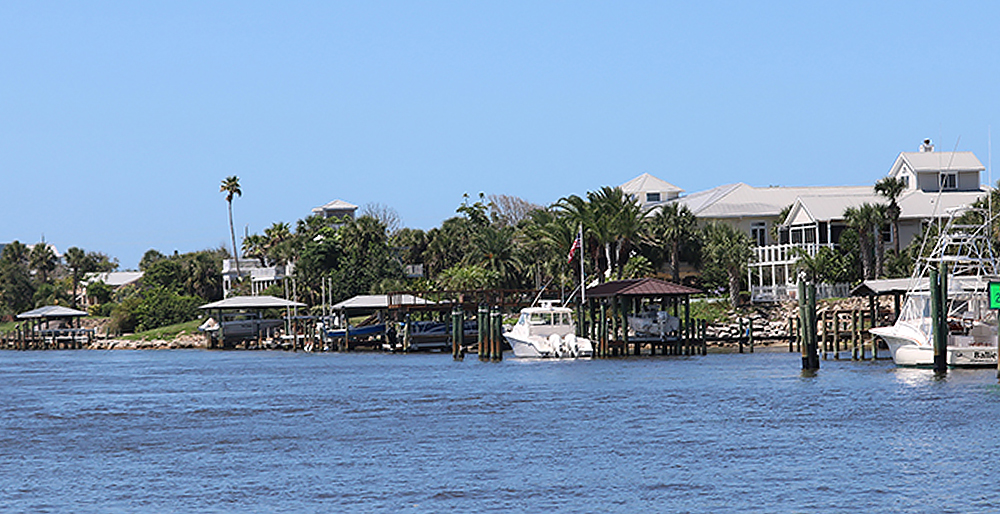 One of the numerous bascule bridges too low for our 55′ mast and requiring a VHF call to the bridge tender for an opening.

We had been discussing (and fretting) for days this procedure. Although it required two passes to get it right (John’s fault), it turned out to be fairly easy. Jane did a beautiful job of maneuvering the boat and getting me close enough to snag the pennant. Fortunately, we were aided by light winds. We know we won’t always be so lucky with winds and waves when we pick up another mooring one day soon (St. Augustine), but we’ll worry about that later.

We had a wonderful night “on the ball” off Titusville. After getting settled, we put the dinghy in the water and motored about a half-mile into the marina for a nice meal and shower, arriving back at the boat just before sundown. A little time in the cockpit discussing the day, and it was time to hit the sack.

I awoke at about 3 am curious to see how we were swinging with the other boats in the mooring field. When I stepped out into the cockpit, I was greeted by a beautiful, calm night. The water was like mirrored glass and the light from a brilliant moon was bouncing everywhere. It was truly breathtaking!

As I stared at the moon, I could also see in my peripheral vision the illuminated Vehicle Assembly Building off in the distance, and it occurred to me that this is where it all happened. The Apollo program and the mission to land a man on the moon that so captured my imagination when I was a teenager, it all happened “right over there”, only a few miles from where we were sleeping aboard Dejarlo.

The next morning, after breakfast and coffee in the cockpit, we dropped our mooring and continued our trek north and around Cape Canaveral.

We had planned to spend the night either at anchor or in a marina slip at New Smyrna Beach, but there was no space for us in the marina and anchorages were limited. So, we decided to continue on to Daytona Beach, another twelve miles north, for a total of forty-two miles for the day.

Except for some harrowing moments (sheer terror) as we got into strong currents and shallow water around the Ponce de Leon Inlet, the trip to Daytona was uneventful. With the aid of the wonderful staff at Halifax Harbor Marina, we tucked ourselves into a slip and settled in for a little boat maintenance, relaxation and exploration of Daytona Beach and the beach at Daytona Beach for a Jimmy Buffet “Tribute” concert. More on that in a later blog post.

We’ll soon be departing Daytona Beach (after all the wind and rain from subtropical storm Alberto has left the area), and heading fifty-five miles up the coast to St. Augustine, with a brief overnight stop at Palm Coast Marina. We’d prefer to anchor, but the anchorages between here and St. Augustine are few, and the possible anchorages listed on the charts around Fort Matanzas are prone to heavy shoaling, something we’d like to avoid at this stage of our learning process.

Heading North on the ICW